The Subtle Art of Playing a Bluff 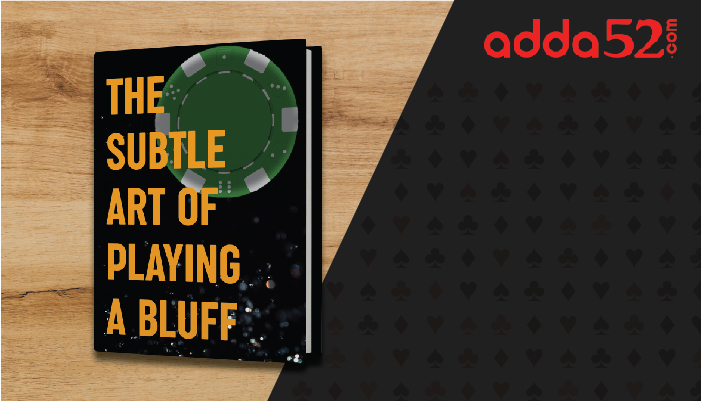 Bluffing is a part of our daily lives. You consciously or subconsciously make a bluff every now and then. Whether it is to avoid a nagging sales call or to cancel out plans you do not wish to commit to, bluffing requires sarcasm based skills. It is a key skill to acquire in poker. A player who is at the top of the poker rankings is bound to be great at bluffing.

What is it that makes a bluff so successful? Bluffing is a method in poker where you do not want your opponent to know the hand you’re holding. A person usually bluffs when he has got a weak hand with the hope that the opponent folds. Let us have a look at three important things you should keep in mind before playing a bluff in Poker.

The skill of bluffing lies in making your opponent think very hard on his next move to manipulate their mind into thinking that you have a very strong hand. A bluff is usually played when a person has a weak hand and wants their opponents to think the opposite way. Do not bluff a player who calls too much. There are various other ways to trap such a player, but bluffing isn’t one. The saying fits in perfectly here,” It’s easier to bluff a good player than a bad player”

Just like you, your opponent has a close eye to all your movements and analyzes your game. If you are a slow player, your bluffs have a high chance of being successful, as your moves are seldom going to be misjudged for a bluff. On the other hand, if you’re an aggressive player who calls or bets too much, your bluff is most likely to not work on the opponent. So while playing card games in India, it is highly advisable to take your image to others into consideration and make your bluffs accordingly.

While playing no-limit poker, it becomes extremely important to know the threshold amount and stop when things look like they’re not going where you want them to. It is believed that as the betting amount goes up, the chances of your bluff being successful increases. This happens because the risk you take is directly proportional to the amount you bet.

If the pot is worth Rs 2000, a raise at Rs 800-1000 should be enough to make your opponent fold. If an opponent is particularly a tight player, an even smaller amount might sound enough for them to fold. Although it is particularly tricky to get an aggressive player to fall for your bluff as they usually match your raise something you’d not like while playing a bluff.

If your opponent gives out confident vibes, it is suggested to fold soon and not extend your bluff as they might have a strong hand and your bluff may cost you a fortune.

Bluffing is a temptation that a rookie often falls for. It is the thrill and anxiety of it that gives you the motivation to bluff. It is one of the major skills in poker you have to master to reach on top. The risk factor of bluffing has reduced now due to the emergence of online poker sites. With websites such as Adda52.com providing Instant Signup bonus, poker has gathered a huge fan following globally, making it a game of the masses. What are you waiting for then? Start practicing your bluffs on Adda52.com, India’s No.1 Poker Site, now!