Good news for all poker fans out there in India that the fifth edition of WPT (World Poker Tour) 2016 is all set to start from October 28 and conclude on November 3 this year. Like previous year, this time too it will be held at the luxurious MGM Grand Sanya. The seven-day tournament is open to 888 players who will be competing for the prestigious WPT title and Prize Pool Money of 8.88 million RMB. MGM Grand has hosted a variety of successful gaming events in the beach city of Sanya. Since its opening back in 2011, the hotel has hosted 4 consecutive WPT National China tournaments in the past 4 years. 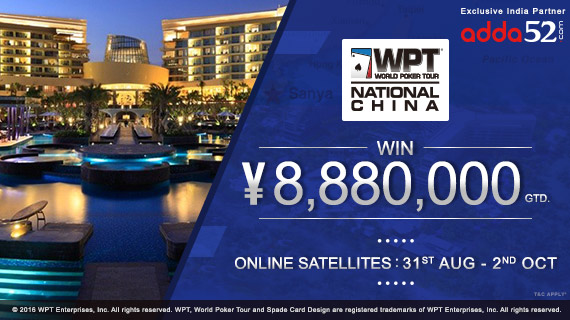 This year’s poker tournament at the MGM Grand Sanya is seen as a great opportunity especially for Indian poker players. Adda52 has started online satellites for its players to fulfill their dream of playing and competing for ¥ 8.88 million ($1.334 millions) event next month at the MGM Grand Sanya.

The online satellites to WPT National china have already started from August 31 and will run through October 2. It is important to share that the two playersIzp96 and pokemon13 has already won satellites and booked their seat to this year’s WPT in China. Make sure to play online satellites on Adda52 and make your way to Asia’s biggest event to compete with the world’s best poker players.

The last year’s WPT National China Main Event found a champion in Shu Sun, who bested a massive field of 881 players to win the first-place prize worth ¥1.5 million ($242,911) and the unique Aurae Solid Gold MasterCard loaded with $10,000. The story of his win was interesting enough. The young man came to Sanya on a vacation with friends and family and in between decided to take part in WPT event running at the MGM Grand Sanya. After getting into the final table play, Sun had to battle it out with the tough players but he managed to get through all of them. Although Sun started his day with a smaller stacks, with his experience he managed to catch up soon and eventually made his vacation an unforgettable experience by winning the most prestigious tournament of WPT China for $242,911.

Now all eyes are fixed on this year’s WPT National China 2016, which is again going to take place at MGM Grand Sanya, a beautiful beach resort that promises excellent location and offers access to city’s biggest attractions. Nestled on the beach of Yalong Bay, MGM Grand Sanya promises breath-taking natural beauty. With blue sea, white beach and lush greenery, it is a perfect retreat away the hectic and stressful life. The MGM Grand Sanya on Hainan Island is an emerging resort destination with over 4,000 square feet dedicated meeting space that can adapt for events of all sizes and types. The property ensures unmatched hospitality with 675 guests rooms, 73 suites and 6 exclusive villas on beach front. The guests are entertained with world’s best foods and drinks here.

As mentioned earlier, MGM Grand Sanya has hosted WPT National China events for four years and it would be the fifth annual 2016 World Poker Tournament National China to be held here.