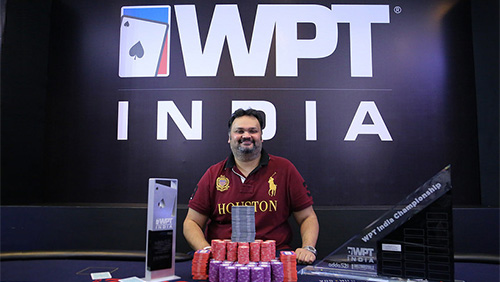 Nikunj Jhunjhunwala won the 2018 WPT India No Limit Hold’em Main Event at the luxurious Deltin Royale Casino in Goa. He outlasted a record field of 697 players over 4 days of action to secure his largest live cash winnings.

“ Coming here, I had this prop bet with my friend that I was either going to final table the Main Event or the High Roller,” Nikunj said to the media after the tournament. “So now that it’s all happened, it’s just starting to sink in.”

The second edition of WPT India shattered attendance records by drawing huge participation from players all over India and collected the mammoth prize pool of Rs. 3,62, 49,576.

It was not an easy victory for Nikunj as he had to face a number of formidable opponents at the final table such as Vidur Singhal, Akshay Nasa, Adda52 Team Pro Amit Jain, and Deepak Singh.

The final table witnessed a fierce battle between the last few remaining competitors. The table was formed after Yuvraj Chaudhary took his leave at the 10th position. Nikunj came into the table with the shortest chip stack (Rs. 1,460,000). The field lost Amit Jain at the 7th and Deepak Singh – who was the chip leader at the starting of the day- at the 4th place. The heads-up began when Vidhur Singhal eliminated at the 3rd place.

Nikunj Jhunjhunwala began the heads-up play with approximately 10.35 million chips to Sahil Mahboobani’s 10.51 million. Nikunj was short-stacked at one point (Sahil had 3-1 chip lead over Nikunj) but he mounted a comeback by putting Sahil under pressure and ultimately secured the victory.

“That’s the beauty of these blind levels,” Nikunj said. “There were instances yesterday when a player had two big blinds, and six hands later he’s rallied to 515,000. I knew that it’s not impossible, so I knew not to lose morale. I had my rail there cheering me on, and that was great.”

Nikunj said, “There was a point in time where my stack was down, and Mahboobani had a 3-1 chip lead over me. My rail was on him and in his ears, and honestly, it was fantastic…I had a sleepless night; lots of anxiety. I knew there were two people at the final table that I wasn’t going to get into hands with until I got a double up. Then, I’d have 25-30 BB stack and I’d open up and wider up my range.”

“I just wanted to give it some time, get a feel for the player, and then start making some moves.” he continued. “It’s better for me to be playing postflop than preflop as compared to these online players where his forte is, he is out-and-out an online player.”

It is the biggest win of Nikunj’s poker career. Before this tournament, his most substantial cash winning was in November 2015, when he took down both the IPC (Indian Poker Championship) Main Event and NLH Highroller for over $50,000.

Adda52 congratulates Nikunj Jhunjhunwala for this astounding win and wishes him luck for all the future endeavours.