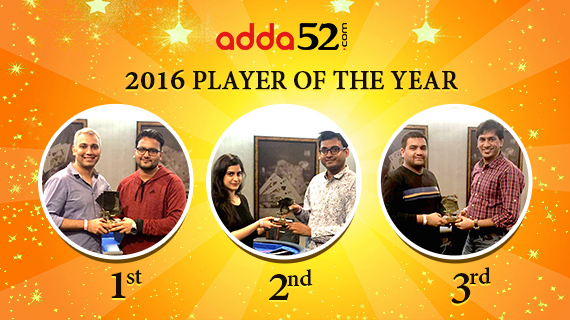 The former DPT 10K Kickoff champion and Adda52 Pro Live Tarun Goyal, who topped the Adda52 Player of the Year Leaderboard with 3501 points, received the coveted POY winner trophy from Adda52 Pro Live Kunal Patni in recognition for his stellar performance through the year 2016. Deepak Bothra, who scooped the 1st runner-up title with 3436 points in the 2016 POY, received his POY Trophy from Delhi-based poker lady and Adda52 Pro Live Nikita Luther. Sidharth Singhvi, who finished 2rd in the POY 2016 with 2722 points, was honored with POY Trophy by Adda52 Pro Live Amit Jain.

Giving poker players a fantastic experience, Adda52.com also organized the High Stakes Cash Game Festival which lasted till 22nd January and saw many poker pros and personalities taking to the cash game tables and enjoying the poker action with their fellow players who came from various parts of the country. The launch ceremony served on the company’s part to bring due recognition to the top players and thereby promote poker growth in India. It was great fun and an opportunity for poker players and fans to mingle and talk with star performers in the game of poker.

Now all eyes are on the first edition of the Deltin Poker Tournament ( DPT), which kicks off this month from 22nd February and will continue through 27th February 2017 aboard the luxurious casino Deltin Royale in Goa. To the delight of poker players in India, the tournament has upped its prize pool up to 1.5 Crore. As usual, the tournament will feature a variety of No Limit Holdem (NLH) and Pot-Limit Omaha (PLO) events in interesting formats such as high-roller, deep stack, and bounty events, giving players a fantastic experience. The poker tournament series will kick off with an online event of “5K Warm Up”, which will be then followed by the live-action with the 10K Kickoff event on 23rd February 2017.

The February edition of the Deltin Poker Tournament (DPT) 2017 will reach its pinnacle point with DPT 60K High Roller (FO) starting on 24th February and Adda52 35K Main Event (RE) taking place on 25th February. Finally, the poker series will conclude with a special 15K 6-Max PLO Event (RE) on 27th February.  Join online satellites currently running on Adda52.com and win tickets to various events of the upcoming DPT.