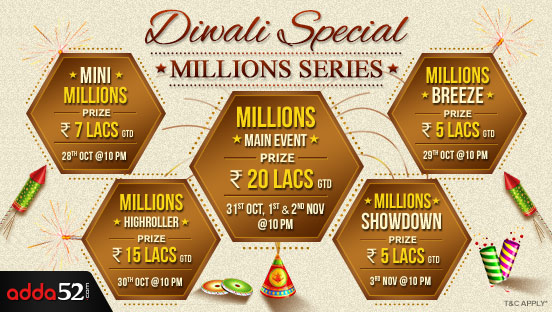 Adda52.com wishes wish you a very happy Diwali! As we all know, Diwali is India’s biggest and most celebrated festival, to double up the excitement for poker players in India, Adda52 has brought up “Diwali Special Millions Series” where you will get a chance to fight it out on the poker felts for a whopping amount of Rs. 52 lac in the prize money.

Early this month, the “October Fest” started with a big bang on India’s largest poker site Adda52.com and continues its festive mode with “Diwali Special Millions Series”, which runs from October 28 to November 3, creating a week-long poker action through the “Festival of Lights” this month. Players of all levels are invited to pitch up and join the fun with plenty of poker action and big prizes on offer.

Mini Millions & Millions Breeze
The seven-day schedule of “Diwali Special Millions Series” features a wide range of exciting tournaments to suit poker players with varied bankrolls. The series kicks off on October 28 with Mini Millions where players can battle it out for Rs.700000 lac in prize pool for a buy-in of just Rs. 5000. The event will begin at 10 PM and will have options of two re-buys, one add-on and late registration of 50 minutes.
The second event of the series Millions Breeze falls on October 29 and promises Rs. 500000 in prize money up for grab. Players can enter the field with a small buy-in of Rs. 5000. This tournament too will start at 10 PM and players will be allowed a late entry and re-entry up to 50 minutes of the play.

Millions High Roller & Main Event
Moving on to the Adda52 Millions High Roller, it is the longest-running and biggest event of the series to be played on Diwali night of October 29. It has been specifically planned for MTT grinders and will for sure provide an opportunity to brighten up their bankrolls with whopping Rs.1500000 in the prize pool. The event will kick off at 10PM and players will have a late entry and re-entry for up to 150 minutes. The highlight of the series will be Millions Main Event, India’s first-ever multi-way online tournament slated to take place from October 31 to November 2. Players of all levels can enter the field for a buy-in of Rs. 7500 for each event-1A on 31st October, 1B on 1st November and Day 2 on 2nd November and join the race for winning from a whopping Rs.2000000 in the prize pool.

Millions Showdown- PLO 6 Max
Pot Limit Omaha has been gaining popularity among Indian players over the years. Keeping the same in view, Adda52.com has a brought up Millions Showdown- PLO 6 Max to give players Omaha flavour. The Rs.7500 buy-in tournament will be the last event of Diwali Festive Season. It will offer a chance to win your share of Rs.500000 in the guaranteed prize pool. Like other tournaments of the series, it will also begin at 10PM at night and players will be allowed a re-entry and late registration for 85 minutes.

2 Amazing Contests
To add more excitement to the Diwali Week, Adda52.com is running an exclusive contest “Guess the Field Size” from 28th-31st October’16 till 8.00 PM wherein you have to guess the total field size of Millions Series- Main Event. The best guess will win an entry to PMT Super Satellite, while 5 runners-ups will get entry ticket to Rs.15000 GTD Money Multiplier Tournament.
Aside from this, Adda52.com is hosting another content “Guess The Winner”, which begins today and will continue through 30th October’16 till 8.00 PM. All you need to do is simply guess the winner of Millions Series- High Roller Event and stand your chance to win a ticket to DPT 5K Warm Up event. Moreover, 5 runners-up of this exclusive contest will get entry ticket to Rs.15000 GTD Money Multiplier Tournament. Winners from these contests will be announced on 3rd November. So, join the race and you could win tickets to the exciting events ahead.