Learn Bluffing from ‘The Usual Suspects’ 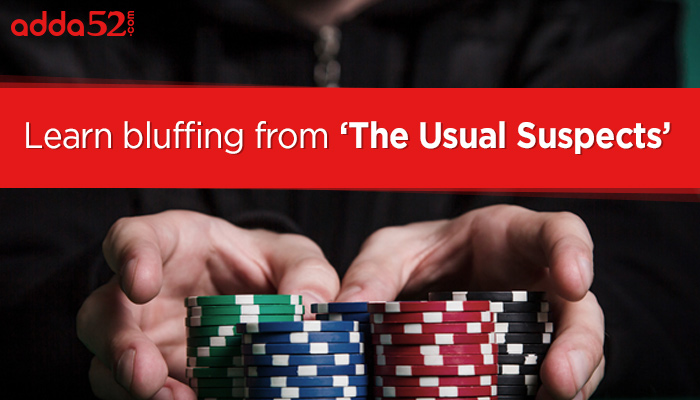 Usual Suspects is termed as a classic with one of the greatest screenplays ever. The movie was released in the year 1995 and created a huge sensation among the audience back in the day.

But why we are talking about the movie here?

The Usual Suspects is a film that every card game player should watch at least once. The movie is all about a federal customs agent trying to get information from a naive con man named ‘Verbal’ Kint. No one knows if he is telling is a made-up story or the truth. Throughout the movie, the audience finds it tough to recognize what is real and what is not. But in the end, he reveals his true identity and suddenly all things started making sense.

The ‘twist-ending’ is one of the most brilliant examples of bluffing. As a player, you can learn some valuable lessons from the noir classic about how to make this powerful strategy work for you at the Poker game online tables.

Verbal created the characters and major details of his story from things scattered around the office where he was being interrogated.  To add realism to the story, he pulled the names from items (bulletin board, coffee mug, etc) familiar to the agent. Similarly in Poker, as you cannot have the best cards every time you play, you need to bluff in order to make your opponents lay their good cards down. As a bluff, you make continuation bet, give false tells, play aggressively, reveal a card, etc as per the situation on the table.  You need to learn how to make your bluff so convincing that even the most experienced player on the table buy it. Also never get attached to a bluff. If your opponent is way too unpredictable to risk money, throw away your cards and wait for the next hand.

Appearance can be deceptive

“The greatest trick the devil ever pulled was convincing the world he didn’t exist.”

Never judge a book by its cover. Verbal behaved like a mild-mannered person in front of the interrogator. But, in the final scenes, it is revealed that he is none other than the mythical crime-lord Keyser Soze himself. At the Poker tables, people are not what they seem. The aggressive opponent doesn’t need to be always carrying the best cards. Also, limping does not indicate a poor starting hand. Other than learning the basic Poker rules, you must also learn how to create a persona as per the requirement of the situation. In order to conceal your true intentions and keep the opponent off guard, you need a put on a misleading appearance. You have to prove to your opponents that you are a serious player who plays only with strong hands.

Stay one step ahead

The interrogator intimidated Verbal in every possible way to extract the truth from him. Verbal observed his thinking process, beliefs, and perceptions and fabricated a story accordingly. In Poker, you must know when is the most profitable time to employ a bluff. Make it only if the factors (table position, image, chip stack, pot odds, opponent’s playing style, betting history of the hand, etc) allow you to do so. Take your time assessing the table for a few hands, identifying your target, predict his hand range, and read his betting pattern. If you bluff against a loose player who re-raises a lot, the chances are higher than it will get unsuccessful. You need to understand your opponent’s thinking process and level of skills to create a game plan.

Bluffing is all about having a psychological advantage over your opponents. Use it only against those players whom you believe will fold their cards even if they have a strong hand. Your move should be completely unpredictable to your opponents. If you leave even the slightest hint of your intentions for your opponent, your bluff will fall flat on its face. The objective of bluffing is to make the opponents act in your desired way. How you will be able to do that depends on your strategic thinking, patience, and decision-making skills!