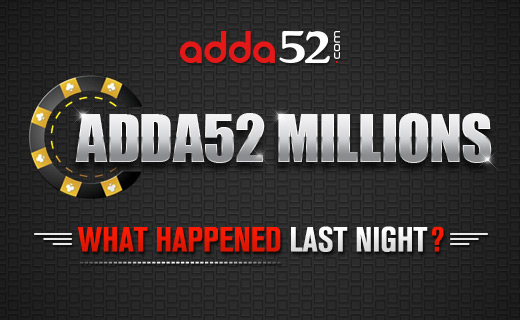 The latest edition of Adda52 Millions that took place on May 29, 2016 saw Nuts_In_Ur_face taking down the title for the prize money of Rs. 4,56,000. The tournament saw 150 entrants and 10 re-entries which racked up the prize pool of 15 Lacs to Rs. 16 Lacs. The deep structured tournament which starts with 300 BB stack took 7 hours to crown the champion.

After over 6 hours of play the final table was formed in the tournament led by Nuts_In_Ur_face. Here is final table chip count:

moto007 was the first casualty on the final table as he went all-in with 246082 chips from mid position and Nuts_In_Ur_face too shoved his entire stack while others folded. At the showdown:

tindermaster was leading pre flop and went on to win the hand as monish1965 failed to improve with the community cards c7 dj c1 s4 h2. monish1965 placed 8th in the tournament for Rs 48000.

rockeritza9 was the 7th finisher in Adda52 Millions. He went all-in with his stack of 218744 and got called by tindermaster.

tindermaster’s pocket nines held up against rockeritza9 as he couldn’t find any help form the community cards and got eliminated in 7th place for Rs 60000.

After the turn s4 and river c4, pornoveloO hit the flush while esrr27 got eliminated during the final showdown and took home Rs. 88,000 in cash prize.

At the showdown, pornoveloO got three of a kind and deepanjan gets eliminated at 5th place bagging Rs. 1,20,000.

In a span of ten minutes, it was MrMontana turn to exit the tourney next. At 20,000/40,000 blind levels, the action started with Nuts_In_Ur_face and going all-in in pre flop. MrMontana followed him going all-in as well.

The last hand of the game was between pornoveloO and Nuts_In_Ur_face holding 244238 and 4555762 chip stack respectively.

Here are the final payouts: