Play Poker at Adda52.com and Fly to Vegas 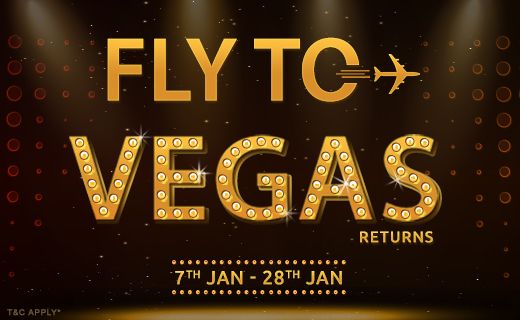 Have you ever dreamt of playing live poker in the world’s biggest stage surrounded by the dazzling glitzy lights of Las Vegas? Of course you have and that too many times! Every poker player dream about the day they would play for huge money at the world’s largest poker tournament. However, an average poker player in India really cannot afford the thousands of dollars to make this poker dream come true.

So once again, here comes the promising opportunity from Adda52.com that will take you to your dream destination Vegas to play at the World’s most prestigious poker tournament! Yes, you heard it right! This year again, Adda52.com is running its hand-picked “Fly to Vegas” promotion Adda52.com offering once-in-a-lifetime opportunity to Indian poker players to win a $10,000 seat to the biggest poker tournament in the world. Launched in January 2015, Fly to Vegas Promotion saw huge participation last year which eventually provided a chance to 10 skilled players to represent India at the world’s prominent poker tournament in Vegas. The online poker site has always supported and sponsored live tournaments. In 2013, the site had tied up with Asian Poker Tour to enable the best Indian poker players to compete in the global arena.

The Fly to Vegas promotion is kicking off today, i.e, January 7, 2016. So, all you online poker players out there! Register at adda52.com and play real cash games to be a part of ‘Road to Vegas’ Tournament. Play every hand and accumulate loyalty points to get direct entry to this tournament. Moreover, these loyalty points can be surrendered to play exclusive “Fly To Vegas” satellites scheduled to take place on January 27. So, the more loyalty points you earn, the better is your chance to be the part of Main Event on the Januarry 28 and note only 25 seats are available. And, if you are the winner, then get ready to pack your bags and go to the $10,000 Main Event of the world’s largest poker tournament.

Here is the schedule of the tournament:

Did you know the world’s premier poker tournament that takes place in Las Vegas is globally recognized for the sport’s top prize, and has been awarding more than $2 billion in prize money and the prestigious gold bracelet? Are you ready to compete to battle for that coveted bracelet and a life-changing cash prize at the world’s most celebrated poker tournament set to take place in entertainment capital of the world? Do you have those poker skills that will bulldoze your way past the competition and claim the spoils of victory? Go Play and beat the competition as Indian poker has never been packaged so well before.