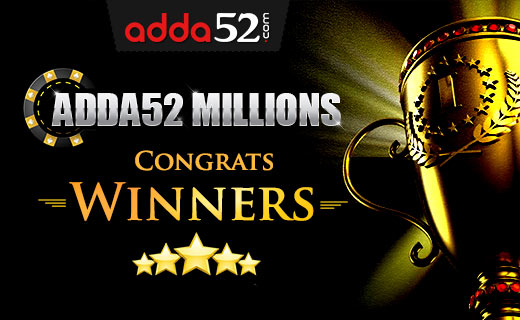 The June 2016 edition of Adda52 Millions took place on June 26 which saw ‘sasikiranx’ emerging as a winner. After the competent play, he took down the title and took home the prize money of Rs. 4,90,200. The online poker tournament saw 149 entrants and 22 re-entries which racked up the prize pool of 15 Lacs to Rs. 17 Lacs. The deep structured tournament which starts with 300 BB stack took 7 hours 34 minutes to crown the winner.

At blind level 12000:24000, rockeritza9 was the first casualty on the final table as he went all-in with 330423 chips from mid position when sasikiranx shoved his entire stack while others folded. At the showdown:

Five minutes later, Aceleration called the pot, and showflopper went all-in while the other players folded.

Hitting the full house, Aceleration went on to win the hand as showflopper failed to improve with the community cards K♣ 9♥ 8♥ 9♣ A♥. showflopper placed 8th in the tournament for R.s 48,000.

After the turn 8♥ and river hq, sasikiranx hit straight while Saurav got eliminated during the final showdown and took home Rs. 88,000 in cash prize.

At the showdown, sasikiranx got four of a kind and pokerfac gets eliminated at 5th place bagging Rs. 1,20,000.

The blind levels changed to 25000:50000 and the next player to exit the tourney was aggtarun at 4th position with Rs. 1,64,000 who was busted by sasikiranx. sasikiranx went all-in on the pre flop and aggtarun also followed.

In a span of ten minutes, it was yasir1986 turn to exit the tourney next. The action on the table started with yasir1986 when he called and sasikiranx also returned a call.

The last hand of the game was between Aceleration and sasikiranx, holding 2146984 and 3013016 chip stack respectively.

Here are the final payouts: