The wait for 5 Priyanka Chopra fans came to an end on 10th September’2014 when they met their favorite star in an event hosted by adda52.com, India’s largest online poker site. The event was actually a reward for the top 5 winners of Mary Kom poker tournament hosted at adda52 for its Poker players. 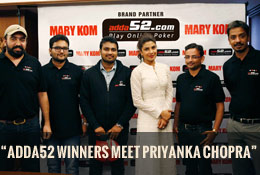 This special ‘Meet and Greet PC’ event with Bollywood’s ‘Desi Girl’ was organized by adda52 in a 5-star hotel in Mumbai for the top 5 winners of its online poker tournament named ‘MaryKom Poker Tournament’. Tarun Goyal, Harjas Singh, Ravi Ranjan, Pulkit Goyal, and Vinayak Jayram were the lucky five winners who went to Mumbai to get clicked with their favorite star Piggy Chops.

Since adda52.com was the brand partner of the movie Mary Kom, thus organized a Poker tournament with the name ‘Mary Kom’ itself. This online poker promotion took place for a fortnight in August-Sept 2014 and the winners of this tourney were invited to meet PC.

This sports movie narrates the journey of the female Olympic medalist, MC Mary Kom, against all odds. Priyanka Chopra is portraying the female protagonist Mary Kom who is a five-time World boxing female champion.

For Adda52 poker players, this poker promotion brought an amazing chance to meet the Bollywood Diva – Priyanka Chopra. Thus the contest was a big hit across the Indian poker community with participation running into thousands. But it took some poker skill for these top 5 players to be chosen to meet and get clicked with this super star of Indian cinema.

The all-time favorite of the winners’, Priyanka Chopra’, exchanged few bytes of interaction with all 5 winners. The representative of adda52.com greeted PC with a pack of adda52 cards deck and in conversation with him, Priyanka mentioned how well adda52 had promoted the campaign. One of the winners, Harjas Singh said “I am very excited as I never thought that I will ever get the opportunity in my life to meet such a big star, Priyanka Chopra. For this, I am really thankful to adda52.com as they kept their promise.”

Pulkit Goyal who is a state-level boxer also shared a boxing punch with Priyanka. He was amazed by her charm and said, “It was an awesome experience for me, I have boxed at the national level but never thought that I would exchange punches with Priyanka Chopra. Thanks a lot to Adda52 for this incredible opportunity.”