Demonetisation & the Rise of Online Poker 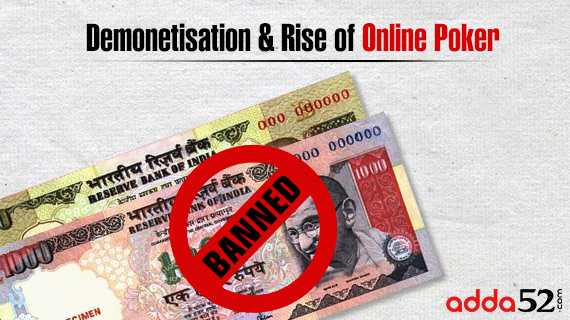 On 8 November 2016, our Honourable Prime Minister Narendra Modi made the demonetisation announcement, stripping currency of Rs. 1000 and Rs. 500 currency of its status as legal tender, which created a pandemonium situation in India. The decision to demonetize the existing Rs. 1000 and Rs. 500 has stirred up hearty emotions of Indian citizens, and its implementation was despicable.

The kickback on demonetisation policy is something the policy makers might not have expected as things always seem favourable at the planning stage. The reasons looked perfect during the initial days, and even the public was convinced that it would weed out hoarded black money, minimise corruption, and transformation of the economy towards a cashless society. Though it is going to be two months now, demonetisation has shown both positive and negative impacts on Indian economy. On one hand, there has been a reduction in terror funding and underground operations like Ponzi schemes have been hit badly and on the other hand, it has slowed down economy and businesses are heading towards bankruptcy. As we are not economists, let’s not get into deep analysis of this swirling issue. It’s time to focus on how demonetisation has affected online gaming industry in India.

The legal gambling centres in Goa and Sikkim have shut down operations because of the looming cash crisis and its impact can be seen as there was 36% fall in the stock of Delta corp – India’s only listed casino operator Delta corp. Moreover, the betting games such as horse riding have taken a huge hit and the most popular Madras Race Club has cancelled the races immediately after the announcement. Thanks to demonetisation, the illegal and underground gambling operations like Matka have stopped working operations as they largely thrive on black money.

In India – a country with strict laws for gambling – setting up a casino is not easy as state governments questions the legality of setting up such businesses. And this has made the online gaming industry has the biggest possessor of demonetisation. As the country has banned games involving betting, people who loved to gamble had to settle for skill games like playing online poker. Thanks to the rising popularity of online poker and its intriguing gameplay that the card game lovers shifted en masse to online poker sites because of demonetisation. It owes to the fact that online rummy has been declared legal by the Supreme Court long back.

According to a report by International Centre for Sport Security (ICSS), “the government may implement measures to legalize betting in India as the volumes of cash involved in the business is up to $150 billion. Furthermore, the All India Gaming Federation (AIGF) is also in process to push the state governments to legalize gambling industry. Thus, the people involved in the illegal betting industry can keep patience and wait for this to happen soon.

However, in this tough time of demonetisation, you can play poker online and multiply your cash and that too legally. We, at Adda52.com, have witnessed a huge rise in our registrations ever since this announcement and the credit goes to our stand today as India’s largest poker site. So, what are you waiting for? It’s time to play, Sign up now and fill your pockets with bundles of cash.