Meet Shah – The Man who conquered the Biggest Prize Pool 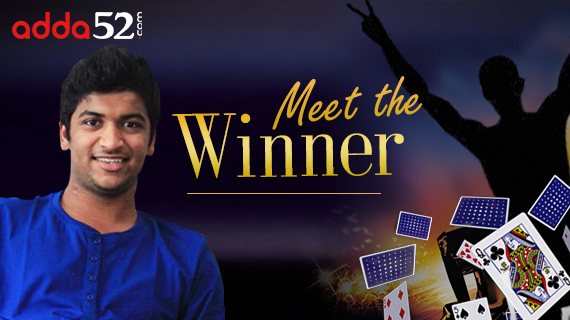 In the month of September, Adda52.com, India’s largest poker destination, announced the launch of the biggest online poker tournament in India, namely, Adda52 Millions offering Indian poker players the ultimate opportunity to pursue their poker dreams. “meetshah_555” aka Meet Shah, a management student from Narsee Monjee Institute of Management Studies (NMIMS) Mumbai, took home the honor of being the first player to grab the 1st place position and prize money in this inaugural event.

With a participation of 130 players and overshooting the GTD. Prize pool of Rs. 10 Lacs by 1.7 Lacs, this tournament created history in the Indian Poker fraternity. Starting on Sept 1, the daily satellite to win a seat to the finale event of this premier tournament had a buy in as low as Rs. 200 that ran until September 25. Players who missed that opportunity also received a chance to play deadline satellites (Buy in Rs. 1000) on 26 and 27 September and could also make a direct entry to the finale event on a buy-in of Rs. 10,000.

Meet Shah overcame the large player pool and kept grinding to earn his spot in this historic event. Life has been like a Poker Roller Coaster for Meet who started playing poker in his college days. Like most Indian poker players, Meet too, was introduced to online poker via Facebook – Zynga Poker. It was last year that Meet entered the world of real money poker when he visited Symbiosis University, Pune for a football tournament. Even though he was visiting the campus for a football tournament, the lure of a poker event sponsored by Adda52 was tempting. So, he entered the tourney and although an amateur in real cash poker, the spark for Poker was ignited and he was ready to take it to the next level.

For participating in the Adda52 sponsored event, Meet received Adda52 voucher worth Rs.500. He came back with intentions to join the platform and hone his poker skills. He registered on Adda52 and began his poker journey. Like any other player, he experienced upswings and downswings in the game, but soon started grinding cash games. Meet also wanted to ‘turn the tables’ to tournament play. So, he began playing small tournaments to train himself, and later switched over to big tournaments. He has cashed in various poker tournaments running on Adda52.com and has even placed first in India Online Poker Tour (IOPT)- 2 Lac Event. His hard work and dedication towards poker paid off when he recently won India’s biggest-ever poker tournament – the one and only Adda52 Millions. Meet’s story is inspirational to all novice poker players. All you need are the skills, a little bit of cash and a lot of practice, to give Poker Pros a run for their money.

Adda52.com has raised the bar high in the online poker fraternity by fulfilling its promise of giving away the biggest guarantees and attracting the best player pool. With Rs. 10 Lacs guaranteed prize pool, Adda52 Millions attracted best poker players – from poker pros to satellite qualifiers, as this No Limit Hold’em tournament was open to everyone. It’s back again this month. Do participate, you can achieve what Meet did.

Previous articleHow to Deal with Downswings in Online Poker?
Next articleFlip the Switch – The New Game Lobby has Arrived