Milestones Along Our Incredible Journey – Adda52.com 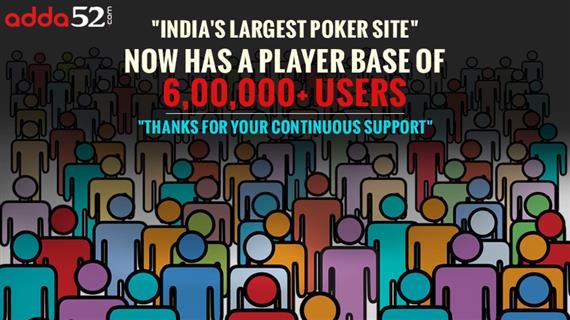 “A market leader, like a football player, always keeps running, and kicking the ball to achieve a goal.”

Let’s talk about the story of an online poker site whose success story is intertwined with the incredible development of poker in India. Adda52.com, deservingly credited as the pioneer of online poker in India is not only the market leader but also the benchmark in an otherwise sunrise industry. A series of key developments and occurrence of events has propelled Adda52.com to be amongst the most respected and recognised poker brands in Asia.

Launched in January 2012, the website looked to satiate the poker appetite with its home bred software with all international poker standards but with an Indian flavour. Within a month of its launch, Adda52.com started Real Cash and ‘Sit n Go’ poker games. The company at that time was running the most popular variant of poker – No Limit Texas Hold’em on its site, and In a matter of 6 months, Adda52.com introduced multi-table poker tournaments with large prize pools in June 2012. In just one year of its launch in January 2013, company added 1 Lac users to its site.

The first year of this poker portal looked great, and it had more milestones to achieve further. With such an awesome response from Indian poker fans, Adda52.com introduced Pot Limit Omaha- the second most popular poker variant in February 2013, and by the end of the year it had added another milestone to its journey. Yes! Adda52.com now had a player base of over 2.5 Lac users on its network. The best was yet to come! In the year 2014, this poker destination made two significant innovations: launch of a mobile compatible poker platform (June 2014) and launch of India’s largest guaranteed prize money online poker tournament, namely, Poker Millionaire Tour (September 2014). Furthermore, Adda52.com introduced advanced gaming features like Multi-Run, Muck, Tease and many more in all poker variants at the same time setting its software a notch above the others.

2015 has been a year of key breakthroughs in its journey to success. In January 2015, India’s prominent poker site attained a milestone of 5 lac+ registered users in the country (almost double the number of users it had in Jan 2014); added Omaha Hi/Lo- an exciting new variant of Omaha poker to its gaming repertoire, and also set out to form a Poker Team India for Las Vegas with its ‘Fly to Vegas’ Promotion (wherein players got a chance to play at World’s Largest Poker Tournament in Las Vegas).

In February 2015, adda52.com launched India’s first ever Poker Pro Team- ‘Team Spades’ featuring Amit Jain, Aditya Sushant, Muskan Sethi and Kunal Patni. To brand itself as a youthful and vibrant identity, the website unveiled its new corporate identity by transforming their logo. May 2015 brought with it the biggest landmark for a poker site in India as Adda52.com added 6 Lakh users to its database.With 6,00,000 registered users, Adda52 stamps its authority as the largest poker entity in India.

What’s next to come? In the next quarter, Adda52.com is soon launching its mobile app for players to access their favourite game from their hand-held devices anytime anywhere. India’s first ever Team Online, a roster of the best online poker players is also on the cards.

Stay Tuned with Adda52’s blog to know about the milestones that your favorite website touches along its poker journey.

Previous articlePoker Face or the Smiling Poker Face?
Next articleThis Founder’s Day Adda52.com Thank You for its Achievements