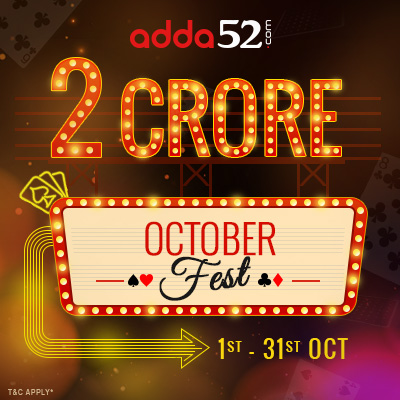 Promising the unlimited poker action and unbelievable giveaways upto Rs. 2 crore, the October Fest started with a big bang at adda52.com wherein 885 players played 5 Lacs Depositors Freeroll on 2nd October. The festive month is turning out to be highly rewarding with the third edition of Indian Poker League going in full swing. Running from 9th October, the cash game series has over 300 players who are battling it out for a whopping prize money of Rs. 12,37,500 across multiple leaderboards.

The poker excitement does not end with Indian Poker League, adda52.com has a lot to offer to satisfy your poker passion. The website is running the Poker Millionaire Tour (PMT) from 1st to 16th October to make your poker nights more exiting. The PMT is a big guarantee tournament wherein players can join to hunt down their share from a whopping 8 lacs in the cash prize pool and multiply their earnings.

The festivity will continue with a novel tournament – Grand Holdem Battle from 20th-23rd October. Every night is going to be a special treat for poker enthusiasts with Grand Holdem Battle at 10:30 PM wherein players can hunt down to win from the big guaranteed prize of 8 lacs. The tournament starts with Rs 800 Queen Battle on 20th October wherein you have a chance to win from 1 lac in prize pool. On 21st and 22nd October, you can play Rs 5,000 King Battle – (High Roller) and Rs 3,000 Ace Battle (Main Event) respectively to win from a big prize pool of 3 lacs. Finally, you can contest Rs 1000+500 Jack Battle – Bounty on 23rd October to win your share from a mammoth 1 lac in the prize pool money.

Cracking fireworks and festive lights are the hallmark of Diwali. Adda52.com adds more zing to this Festival of Lights, as the poker site is hosting Diwali Special Millions Series from 28th to 3rd November to give players a chance to multiply their Diwali earnings. This 7-day special promotion promises to be the biggest Diwali poker series in Indian poker history, having the biggest guaranteed prize pool worth Rs. 52 lacs.

The Diwali Special Millions Series starts with Rs 5,000 Mini Millions wherein poker players have their chance win from the prize pool of Rs. 7 lacs. The Diwali day celebrations will amplify with Rs 10,000 Millions High Roller (15 Lacs GTD) which is also a part of 2016 POY. The highlight of this series is Millions Main Event on 31st October wherein Diwali players can stand their chance to win from a whopping 20 lacs in prize pool money. The series ends with Rs 7,500 Millions Showdown PLO event on 3rd November.

Adda52 is hosting super satellites to this series starting 24th October, every day at 10:30 PM wherein you can win tickets to all the events for a buy-in of just Rs 3,000.

Sure, October is going to be the most rewarding festive season for Indian poker players. Unlimited poker action across cash tables and tournaments with huge rewards awaits you across the remaining 17 days of October 2016 on adda52.com. Be a part of this October fest and double your festive celebrations.