Biases in Poker You Should Avoid 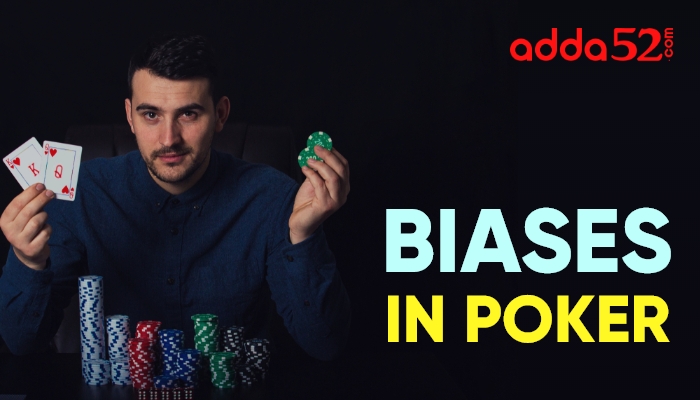 We face a lot of biases in life & also in poker it turns out. These biases often lead us to keep a blind eye towards the logical, more sensible approach.

Here are some of the most common biases in poker that you should avoid:

The Gambler’s fallacy or the Monte Carlo fallacy is the belief that if an event has occurred more time in the past than it normally should, chances are it is less likely to happen in the future. In simpler words, this is a belief that the events of the future are influenced by the events of the past, especially in a situation where probability plays a part

While playing poker, a lot of players tend to follow this pattern with the poker sequence that has already passed. Does not necessarily work in their favour.

It has been stressed that no matter what you do in poker, you can never win all the games. There are still instances where players believe they can control or at least predict external events. You need to understand that there will be times when you lose a game even if you played the best way possible, & you have to deal with it.

Dwelling over situations that occurred in the past & thinking about not letting the external events control them for you is pretty much like being sucked in an earthquake & thinking you’ll never get stuck in one again.

While sitting on a poker table, your aim might be to win all the hands you play. But knowing that losing a few hands is inevitable is what a pro player knows. The outcome of the game hence might not turn in your favour.

What is important is that the decisions you made were the most suitable at the time. Being result-oriented will not help in poker. Having the right technique will though, eventually help in the long run.

This is a general human tendency. We believe strongly in the phrase, “All’s well that ends well.” We are taught in life to perceive how things ended for us. This does not stand true in a poker game.

Always analyze the average of all your results while you were seated at the poker table. Your experience does not become pleasant/unpleasant based on how you played towards the end but how you played throughout the game. Peaking at the end does not necessarily mean you end up making a profit.

It is a basic human tendency to favour one thing over the other & have a general bias. What is key is that we do not let that affect our poker game. We know that poker is a game of skill & one of those skills is handling our emotions. Keep a logical & sensible approach on the table & always look to improve your game by developing skills & keeping yourself open to all options that might come on your way.