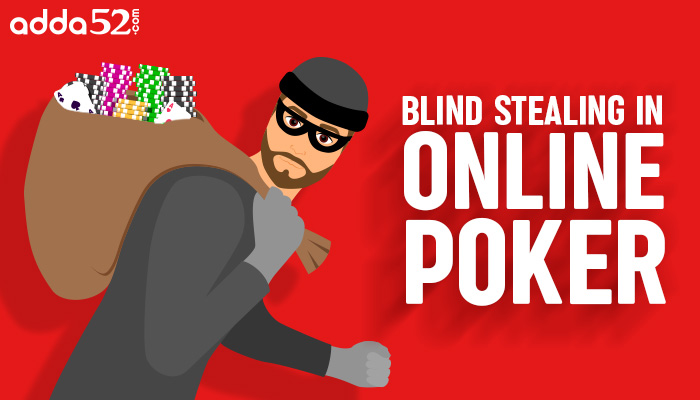 Once you learn to play poker, it is important to feel good about your game. It helps you enhance your poker experience and develops your urge to win. If you have been into the game for a while, you must have heard about blind stealing. It is a game scenario wherein one can make a move with any two hole cards (even the weaker hands) and when the pot only contains the two blinds. That is, if you are in the late position and the first to act, you can raise on pre-flop in order to steal the blinds. Sounds shady? It is not at all odd; instead it is one of the fine ways of playing cost-effective pre-flop poker. Basically, you are making an open-raise from the small blind, button or cut-off. One gets to steal the blinds if other players have folded and he/she is on the button. Following are the awesome ways to use bind stealing for your benefit:

Generally, blind stealing takes place in the first hand of the blinds changing. So, you need to look out for such opportunities. You should tend to create a tight but aggressive table image by always showing your good hands and attempt bluffing with zero frequency.

Poker is a dynamic game where one can make game moves as per the action rolling out on the table. As a poker player, you can take a stab at the passive big blind to earn profits. A passive player on big blind is treated as a source of free money. You may have to concede the passive blinds to him if he has a position on you, depending on how he bets to win the pots. Thus, you need to plan your moves according to the situation, for instance, if you have a better position on the aggressive player, then you should play back at him regularly.

It is necessary to know your opponents on the poker table. You may come across some players who will put you in the complex situation by re-raising your blind steal attempts. So, be cautious and make planned moves especially when sitting to their right. On the contrary, you will find some players who will fold their cards to a raise; and respect their decision if they call on the flop. You may hit a worse hand on the flop, but you can still improve your stealing range against these players.

Fix your game when caught

During the course of game, the opponents sitting on your table will note down your playing history. And if you are caught blind stealing, it will affect your tight table or any fold equity image. In such a case, you can turn a loose table image in your favour by playing only superior hands such as QQ or KK, particularly against loose opponents.

Know when to give up

This is the toughest part when blind stealing in Texas Hold’em. If the action on the poker table continues till the turn or Fourth Street, you should focus on playing the game instead of blind stealing. Even if you have the benefit of position, you should give up the hand if your opponent shows the sign of aggression.

To conclude, blind stealing is effective for small pot online poker games. One should avoid betting the all the chips, and should moderate your blind stealing attempts if there are calling stations on the table. The scientifically correct way to play ‘blind stealing’ is to take advantage of your average player’s inability to adapt to increasing blinds while maintaining your aggression.