You must have played Rummy card game with your family and friends. But, have you ever played Rummy with Paplu, Nichlu or Tiplu? Don’t be surprised, these are not the names of any important persons but they are the names of cards that have special importance in popular Indian Rummy variant “Marriage”. 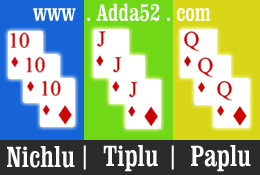 Marriage, a three-pack Rummy game, is also popular in Nepal and Bhutan. In India, it is widely played during the two main Hindu festivals Dusshera and Diwali and by card buffs throughout the year. Two to five people can play this game using three standard 52-cards packs. There are no printed jokers, but in each deal, a number of wild cards are created and these are sometimes collectively known as “Jokers”. The deal and play are clockwise.

As in any Rummy game, the object is to collect sets of equal cards and runs of consecutive cards in the suit. In Marriage, all these combinations consist of three cards only. After 21 cards are dealt with all the players, one card is pulled out from the remaining deck and it is called ‘Tiplu’. The lower card to the Tiplu is called ‘Nichlu’ and the higher card is called ‘Paplu’.

For example, if the Tiplu is the

J are Tiplu;
• The three

Q are Paplu;
• The three

These Tiplu, Paplu and Nichlu are called point card and they have their values which one can collect from all other players on behalf of holding these cards. The sequence of Paplu, Tiplu and Nichlu is called a marriage. A marriage is always worth the most number of points.

The gameplay is simple. The dealer deals 21 cards to each player and turns the next card face up to begin the discard pile, and places the remaining cards face down in a stack. Any player who is dealt with three identical cards can expose these cards immediately, and they may then be worth points at the end of the game. If the identical cards are not exposed at the start, because the owner either acquired it later or chose not to expose it, has no point value.

The play begins with the person sitting to the left of the dealer, and players take turns clockwise around the table. Each player, in turn, may take either the (unknown) top card of the face-down stack or the face-up card discarded by the previous player (on the very first turn, the first player may take the card turned up by the dealer). The player must then discard one card face up on the discard pile. Although the discard pile is spread so that players can still see all the cards that have been discarded previously, players are only allowed to pick up the latest discard. A player who takes the face-up card from the discard pile is not allowed to discard the same card.

There are two ways in which the play can end:
• A player who has laid down three combinations that are tunnels (three identical cards) or pure sequences is able after drawing a card to form four more valid three-card combinations. The player lays down these combinations, discards the remaining card, and the play ends.
• After drawing, a player has eight dublees (pairs of identical cards). The player lays them down and the play ends. Eight dublees use 16 cards, so the player will have five unused cards plus a discard – these can be any cards.

One of the greatest reasons why this game is so popular is its flexibility. Various extra jokers kept in the deck make this game a speedy event whereas the absence of jokers turns this game to a slow time passing game.