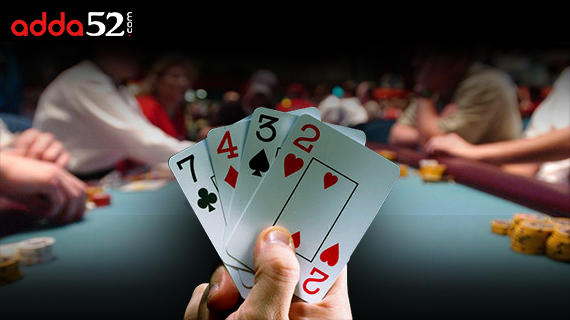 Omaha is not necessarily a high-low split game; you can play it as a high-only game also. Omaha-high only is often played in pot-limit form in card casinos. Betting can escalate extremely quickly in these games, and the last thing anyone could ever advice a beginning player is to either play pot-limit or no-limit poker. This game is very popular in European countries, and pot-limit games hold dominance in England, Ireland and continental Europe. The mechanics of Omaha High are similar to those of Omaha 8. Each player on the table is dealt four hole cards. After pre-flop – the first round of betting, three community cards are dealt face-up on the table. A betting round takes place again, and a fourth community card is placed on the table, and another betting round follows. Then a fifth community card is placed on the board and the final betting round follows. At the showdown, the player who makes the best five-card hand combination wins the pot. Though the game play remains the same but you can expect some major differences in strategy while playing Omaha high only:

Ditch Low Hands
You should never play low hands in Omaha High because low hands won’t win you much in this game. A hand like A-2-3-4 is a upper-hand in Omaha/8 as it makes the best low hand and lets you seize half the pot. Being a a high-only game, this low hand holds a low worth in Omaha.

Mid-range is Okay
In Omaha/8, you seldom get an opportunity to play a hand like 9-8-7-6. And, even if you make the best possible straight, you usually have to settle for the half pot because a better low hand also exists. Moreover, if you make the lower end straight like 8-9-10-J-Q, your play is like a hit-or-miss because someone may have a bigger straight. Bit if you are playing for high only, you never have to worry about a lower hand snatching half the pot out under your nose.

Wrap It
When you play Omaha High, then most of the times it’s a game of straights and flushes. It is because each player is dealt four hole cards which can be used to form six distinct two-card combinations. Making a straight or a flush is not quite the rarity it is in Texas Hold’em, where each player has only one two-card combination to work with. Wherever there is possible straight due to the array of community cards, an Omaha hand is much more likely to have the right two-card combination than a Hold’em hand. Whenever the board is paired, players on the table may either hit a full house or a four-of-a-kind. But beyond those possibilities, straights and flushes, are the name of the game as it is not possible to make a flush without three community cards of the same suit. This is when wraps come into play. If you have four sequenced cards or four cards with a small gap, you can make a straight in any number of ways. For instance, if you are dealt j-10-7-6, and the flop is 9-8-3, you can make a straight with a queen, jack, 10,7,6 or 5. Thus, with those four hole cards in your hand, and two more boards cards – turn and river – to be dealt, you can expect to complete a straight more than 70 percent of the time.

Big Flushes
When you plan of making a flush in Omaha High, you hope of hitting a big pot. However, your planned game strategy may fail when you lose to bigger flush hand. Thus, it is rather better to make a straight with a hand like 9-8-7-6 than a flush.

Thus the best way to learn Omaha High Only is to find an inexpensive tournament. Even if the tournament event is pot-limit, you can afford to play and learn as long as the cost to enter the tournament is within your poker budget.

How to play Omaha Hi-Lo Poker