How are Rummy and Poker Related 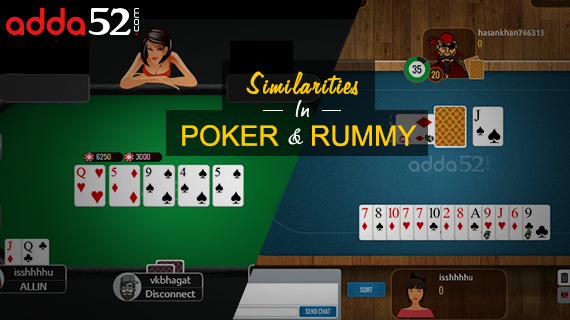 Originated in Europe in the 18th century, Rummy is a card game that involves making of three of four card combinations of the same rank or the same suit. As the game involves no betting factor and individual play, it has been classified as a skill game under law. Popularly known as club game, Rummy is played in different variants in different countries. Some of its popular variants are Gin Rummy, 13-card Rummy, etc.

Originated in the 20th century, poker is a skill game that involves making of the best 5-card combination from 2 cards dealt privately to each player and three community cards dealt on the table. Poker is the most popular card game with global presence and mass appeal. Though poker is played in various forms and types, it’s most commonly played variant is Texas Hold’em.

The primary difference between Rummy and Poker is the gameplay. Moreover, in rummy players are dealt a minimum of 13 cards while in poker players are dealt a minimum of 2 cards. However, the gameplay in both the games not just depends on the cards a player is holding, it depends on the skills he/she possess for playing the game. Though both the rummy and poker fall under gambling category, but these games stand equal to skill game – chess which is listed under the Sports category. You must have read a lot about the difference between poker and rummy but did you know both the games share a few similarities as well.

Similarities between Rummy and Poker:

To summarize, both rummy and poker are great games to play. So, whatever you choose to play – poker or rummy – just remember these card games will not only help in money making but also help in enhancing your skill set.