Kalooki 40 is a very popular game; it is a variant of the card game Rummy. There are many variations of Rummy but we have to always remember that classic rummy came first. The classic Rummy game has a very long and rich history, although it is mostly about theories. They have theories that say it started in Asia, Spain, and Mexico or that the game was originally derived as a softer version of poker. One popular theory is that it got its beginnings from the Spanish card game of Conquian. 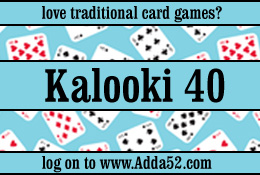 The poker theory bears notice since the game play and betting are a bit similar. There was an old poker game called rum poker and this may well be what it evolved into. Then there is the Mahjong theory, there are a few similarities but not enough to give this one much weight. Wherever it may have started, Rummy and its variations like Kalooki 40 has become a favorite past time of those who gamble and also for those who play just for the fun of it.

Kalooki 40 is not the only Kalooki variation to be played at the online casino. There is also Kalooki 51 and the two of these are played in a similar manner. Although it has a striking resemblance to Contract rummy, kalooki 40 rummy has a unique set of rules that makes it distinctive. In contract rummy you can meld with anything but in the Kalooki you must meet certain melding requirements before you can meld. This makes the game a lot more interesting. In contract rummy you meld until you can go all out, but in Kalooki you can go out if you can get rid of all the cards in your hand in one play.

History
The name of the game is spelled differently depending on the region you are in. Its various names include kaluki, caloochi, kalougi and kaloochi. The game play is the same, no matter what you call it. You can easily tell that it is a direct offshoot of standard rummy since it still has all of the original elements. What makes Kalooki so different is that some geniuses made it harder to make that first play. They added the stipulation that the point value of the initial meld had to be 40 or more. Unlike contract rummy that has different requirements of sets and runs in each round, there is only one above mentioned stipulation in Kalooki.

Popularity
Although not quite as popular worldwide as other variants of rummy this one has its own unique following. The players that choose Kalooki 40 do so for the added challenge. In addition to Kalooki 40 & 51 there is European Kalooki, North American Kalooki and even a Jamaican version. This game has made the tour around the world and has secured fans all over the globe.