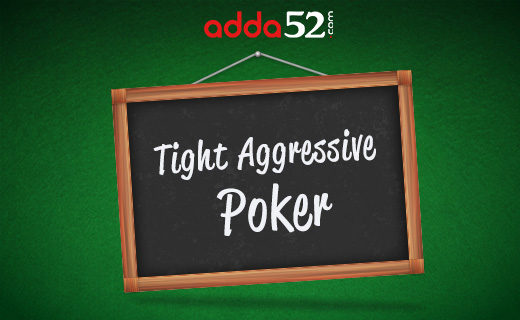 Do you love to play online poker? Do you have a tendency to lose more and win less? Have you already employed all game playing styles, and still there is no change? If that is so, the best way to win poker games and earn money is to follow a tight aggressive poker playing. In this game style, ‘tight’ means to be selective in deciding what hands to play and what hands to fold, and ‘aggressive’ refers to the style of betting. Thus, tight-aggressive playing style is the one in which a player only plays 20% of the hands and that too the best ones; and bet aggressively when holding strong hands. The underlying goal behind the tight aggressive play is that if you are unable to decide where you stand – fold the hand and if you have a strong hand – play the game.

The tight aggressive play has only one major disadvantage. The game may seem slow and boring at times because you would be playing only strong hands and folding all the hands. Moreover, such a playing style demands extra patience level, and sometimes even the professional players lose their cool while playing poker.

The aggressive but tight poker player is the toughest opponent to knock out in the game of poker. While there are no poker rules, here are some poker tricks to battle out such players in online poker games:

Though tight aggressive poker is the most predictable playing style, it works out well in the long run. It is seen as a valuable option in low limit games but will prove to be your best friend when you move up the stake where the games get tougher. So, if you want to be the better poker player and earn extra money, this is the best poker playing style for you. You can practice it with free poker game on many of the poker sites in India.