WSOP is one of those prestigious poker fraternities who have always been known for experimenting with poker game & its formats, creating various poker records – be it a professional poker tournament or a tourney for charity. One of such records held by WSOP is for hosting the most expensive re-buy tournament in the poker history of WSOP. The 2012 WSOP Europe series presented the most expensive re-buy poker tournament. 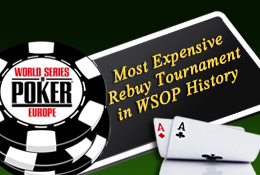 For those who are not aware of this fact, the final event, listed on the schedule of WSOP Europe 2012, was a non-bracelet €51,000 Super High Roller Event with unlimited re-buys.

Although it was an event of “just €51,000?, many poker lovers went crazy with this idea. There were many others bringing to €255,000 in re-buy money, following a trend of insane buy-ins. Evidently, there was a great demand for such events. However, some players did complain about these events, considering it a nuisance of all-time money list. Still a large number of poker fans saw the events and WSOP drew solid numbers.

This is not the first time when WSOP has experimented with the traditional poker game formats. Back in 2006, they hosted the $50,000 HORSE Event, the $50K Poker Player’s Championship & later at $250k Super High-Roller at Aussie Millions. In fact, they also trialed their trending formats with poker charity events – the Big One for One Drop.

Re-buy tournaments can be made part of the WSOP, but only the genuine re-buy events and not the simulated ones. Share your thoughts on it in the comment section!!