Oklahoma gin rummy belongs to the family of card games that are played based on variations of the same gaming structure. The game play generally consists of drawing and discarding the playing cards, the game takes a series of rounds to complete. Each player has an opportunity to draw and discard during their turn. The objective is to “meld” the cards they have. The cards have to be in sets or runs to be played or to be counted. A run is having 3 or more cards of the same suit but they have to be consecutive. A meld of 3 cards of the same rank is called a set. 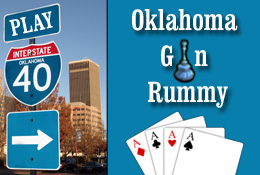 The history of Oklahoma gin rummy is rather interesting. There are conflicting stories and very little evidence of either. Rummy resembles a game brought and played by the Spanish settlers as they immigrated west while many believe the origins of Oklahoma gin rummy is the game conquian. Although the play is similar, the scoring is very different. The problem with conquian was that the rates for play were fixed and this just wasn’t good enough for the gamblers. They wanted to control the growth of the pots and the stakes.

Some of the Oklahoma gin rummy origin stories trace it back centuries to games played in the orient and still others say it started as recent as the 19th century in New York. The game of Mahjong is played on the same principle as are a lot of other games of Chinese origin. The game initially was called rum but since it was played during prohibition in the 1030’s, the alcoholic beverage gin became associated with it and its players.

The fact that the stars of stage and screen took to the game added to the popularity of Oklahoma gin rummy. Initially the game was revised to provide faster play and easier betting. They also modified the rules of regular rummy to adapt to this new format. Credit for this is most often given to an American named Elwood Baker. In his time he was a tutor for those wanting to become proficient in the game of bridge. The biggest difference that you will find with Oklahoma gin rummy is in the scoring. It is actually more complex than rummy.

They also kept it interesting by inserting an additional rule for knocking. The game got a boost in popularity as it was often used as a prop in theater productions in the early years of American history. This popularity continued to grow as the settlers moved west. With long cattle drives and harsh winters it became a game that was played by young and old alike.

Although the history is still being debated by those who care to, what matters is that the game continues to rise in popularity today. This is probably because you cannot enter an online game room where the game is not being played. Oklahoma gin rummy and several other variations are expected continue to pique the interest of gambles and just for fun players around the world.