Online Poker v/s Fantasy Sports – Which One is Better? 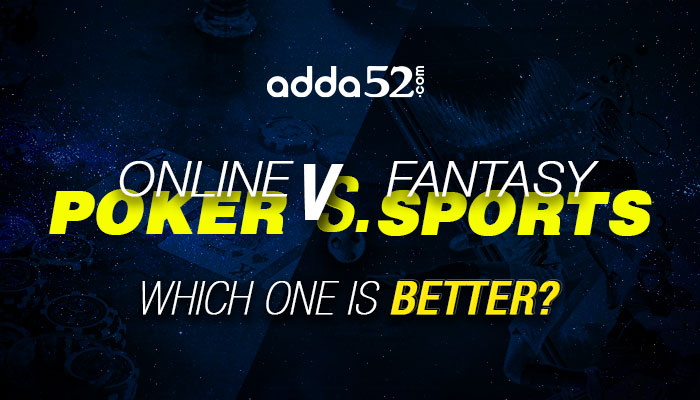 Online poker and fantasy games are gaining huge popularity as technology is advancing and people are shifting from offline to online gaming. As the gaming industry is evolving, a lot of interesting sports are being introduced. The best part about online gaming is that you do not need any physical equipment to play. In addition to this, you do not even need the physical presence of people or friends to play with you. You can always switch on your laptops, mobile phones, or computers and start playing. A lot of people love playing poker online, however, gamers are now entering the world of fantasy sports as well. These two games are similar yet are so different. Moreover, both of them come with their own share of pros and cons.

What are fantasy sports?

Before understanding which of the following games is better, let us discuss the true meaning of fantasy sports. Well, let us simply it for you – games that are based on online predictions are called fantasy sports. If you are a sports fanatic, you can visit some fantasy sports platforms and create your own virtual team. One of the reasons why it is called a ‘fantasy’ sport is because you can even include people who are in the opposite team for real in your virtual team as one. For example, if you are planning to make a fantasy cricket team, you can pick one cricketer from the India team and another from Australia. Moreover, multiple people can pick the same player. In order to avoid confusion, people who take part in fantasy sports are called managers, and the ones who play are called players. In fantasy sports, after a virtual team is formed, their performance is based on real-life statistics. These statistics then get converted into fantasy points and depending on that, managers earn money and other prizes. Fantasy sports are gaining huge popularity nowadays because people are getting more and more interested in sports. Moreover, since it is a more active way of being a part of any sports, people are getting involved as much as they can.

What is online poker?

When it comes to online poker, we all must have played some card games in our lives, whether it is offline or online. Online poker is one of the most popular card games which is played across the world. People even play this game during different festivities. Earlier (and sometimes even now), this game is mistaken as a game of gambling. However, now, it is quite evident that online poker is a game of skills and mind. There is no way you can stay consistent in your winnings if you are winning by fluke. You must know how to use your knowledge and cognitive skills in order to become a champion in online poker. The best part about online poker is that you do not need cards to play the game and neither do you need the physical presence of players. Thus, you are not really dependent on anyone or anything – you can play any time you want and from anywhere around the world. Once you get to know how to play poker online, you will love this game so much that you might want to play it again and again.

Which one is better?

When it comes to deciding which of the above games is better – fantasy sports or online poker – the answer is that you cannot say for sure. It all depends on an individual’s preferences. Some people are more interested in card games where they can play by using their mind and skills while others are interested in putting their judgment to good use by even earning rewards out of it. Deciding which one is a better game is entirely up to the person who is playing it. The best thing to do at this point is to try both the games and figure out yourself. This way, you will get an experience of both the sports and will not need secondary input to decide which one will you like better.

Even though both online poker and fantasy sports are played online and can be played with friends as well as strangers, they are not the same. It is true that both the games have some similarities, for example, both are played online, both are games of skill and mind, both involve taking good decisions and having a sound judgment, etc. however, there are a lot of differences between both the games.

The first and most obvious difference is that in online poker, you play with cards (online ones). However, in fantasy sports, there is no equipment needed as much. Moreover, poker can also be played offline but fantasy sport is an online arrangement for gaming only. One of the most important differences between the two games is that in online poker, you are a more active player. You are more interactive and indulge in exhibiting more social skills. On the other hand, in fantasy sports, you play from a distance and thus, social interactions are limited. Moreover, time is also a huge factor that differentiates online poker from fantasy sports. When you are playing poker online, you know that you have limited time for every move. The clock keeps ticking and you have to act in time in order to stay in the game. However, when you are playing fantasy sports, you have a lot of time to prepare and create useful strategies to make wise decisions.

Even though there are some differences between both games, that does not make one game less than the other. Which one is better for you depends on your choice, mood, and intentions or purpose of playing. Even then, it is completely alright if you keep switching between the two games. Both games are greatly known for enhancing your skills and mental and cognitive abilities. Thus, no matter which game you play, be ready to become smarter.

Online poker and fantasy sports are not just buzzwords anymore, rather they are gaining so much popularity that they have grown to become much more than just fun or entertaining. Even though these games hold some similarities, they are extremely different from each other. However, just because they have a lot of differences does not mean that one of these games is better than the other. If you want to know which of these games should you indulge in, you must try both and figure it out yourself because it is all about your personal choice or preference. Play the game which is more like you, and is in sync with your taste and mood. Enjoy!

Previous articleWhat to Do If You Are Not Sleepy at Night?
Next articleThe Rise of Fantasy Sports in India