One of the variant of Rummy, very popular in South Asia, is 29. It is a trick-taking card game commonly played in northern parts of India especially Uttar Pradesh & Bihar. In 29 card game, the ‘Jack’ and ‘9’ are the highest ranking cards in each suit. This game is descended from the European family of Jass games, which originated in Netherlands. 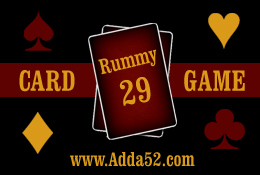 29 card game is closely related to the card game 28, played in the southern states of India especially Kerala. Depending on where you go and who you’re playing with, the game can have diverse rules. Some people play with two decks of cards, some people play to 28 points & some people use the Joker in the deck. Whatever the case may be, the basic rules of 29 have changed very little over the years, and the game is fairly easy to play. Firstly, shuffle and deal the cards out till each player gets 13 cards. Organize the cards in your hand from high-to-low. Ace, King, Queen, and Jacks are all worth one point and numbered cards are worth equal to their face value. The person sitting to the left of the dealer will start the game. When your chance comes, you need to select a card and place it, face up, in the middle of the table. Go clock wise around the table putting cards on top of the cards other players lay down, making a stack of cards. Add up the total of the cards as you go and announce that total after laying your card down. You need to put a card down that will make the total worth of the pile 29 points. The first player to accomplish this wins the round, takes the pile and puts out a new card to start the round over again. You should keep each pile that you win separate from one another. Pass if you can’t put down a card that makes the pile under 29 or equal to 29 points. The pile can never go over this number. The player having the most piles in his possession at the end of the game is the winner. The game is over if no one can put down a card onto the pile without going over 29 points.