Suits And Their Origin 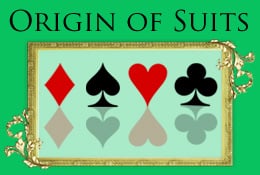 Card Games that we all love playing today originated a long time ago. Played with a well-known standard deck of 52 cards that comprises four suits popularly known as diamonds, spades, hearts, and clubs in today’s time. When you sum up the numerical value of a full deck of cards – 11 for a jack, 12 for a queen, and 13 for a king – you get 364, which, when with one for the joker, equals 365, the number of days in a year.

Let’s get into detail about how the suits originated.

Every suit has a symbol inscribed on the cards that represent it. Suits date back to the Renaissance in Europe in the 14th century, when they were first incorporated with playing cards.

The Italo-Spanish suit system, sometimes known as the Latin suit system, was the first. Cups (Coppe), Coins (Denari), Clubs (Bastoni), and Swords (Espadas) were the four suits in this design. These four suits, according to some experts, symbolized the four classes of people in Europe at the time: clergy, merchants, warriors, and farmers.

For nearly 150 years, the contemporary 52-card deck has been in use. The United States Playing Card Company (USPC) was founded in 1867 and has grown to become one of the world’s leading makers of playing cards and poker chips. They designed a deck that could be used in a variety of real money games, not simply poker and gin rummy.

The Germanic-style suits were the next in order. The four suits of this type were Hearts, Bells, Acorns, and Leaves. Before being expanded to 52 cards, the initial decks used for poker were made up of 20 cards. Poque and Brag are two European games that are similar to poker (cf. The History of Poker). Poque, a French game, was inspired by As Nas and Primero.

The Ace changed from being the lowest card to the highest card during the French Revolution when the peasants successfully staged an uprising and trumped the royalty.

Italian decks generally had 40 cards and were designed specifically for regional games such as Scopa and Briscola. Coins, cups, clubs, and swords were utilized in Italian decks (Spades).

Following the German Suit, the next system was the French Suit system. Because this technique was simple to implement into playing cards and was less expensive to manufacture, it grew in popularity. They were first brought to the English-speaking globe in the 16th century. They proliferated over the British Empire and finally made their way to North America, where they were hugely popular. They are currently referred to as the Anglo-American pattern and are the most widely used suit system in the world. The four suits of this type are Hearts, Spades, Clubs, and Diamonds.

A 48-card deck with four suits was introduced by the Japanese. The game of Mahjong was first established in China and Southeast Asia with three suits: Coins, Strings, and Characters. Today, Japan and continental Asia are particularly fond of the 52-card French Style deck.

If you ask us, the best poker app for android is the Adda52 app which offers a great user interface as well as a sign-up bonus offer for poker players.

It’s fascinating to know that, in addition to the standard stacks, decks, suits, and cards are available in a wide range of variants with so many new poker sites in India, also in other parts of the world each tailored to appeal to regional and international card fans.