The Must-Try Poker Variations Of 2022 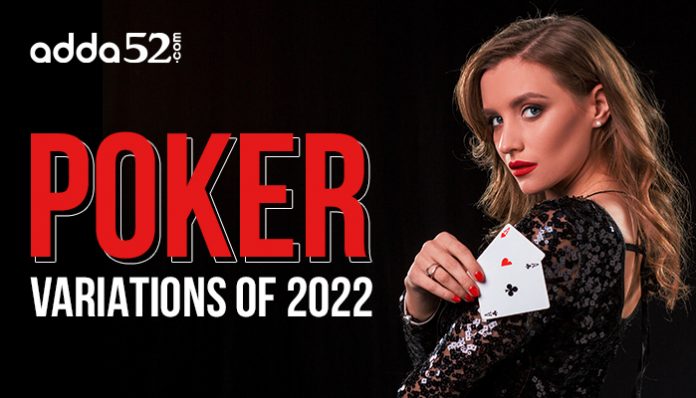 If you’re a poker fanatic and love playing real cash games like online Teen Patti  (तीन पत्ती)or poker, then you must learn about the different variations of poker. What if you can discover a new poker variation that will become your current favourite game to play? Hence, it’s always rewarding to try new things once in a while, which helps in enhancing your love & excitement for the game.

Thus, in this in-depth blog post, we have rounded up some of the must-try poker variations that you should play in 2022.

Omaha Poker Variations That Are Must-Try In 2022

The game starts by handing the players two hole cards which are kept face down. The players are not supposed to reveal these two cards. Then further five cards are kept at the centre of the table – face up – so that everyone can see them. These five cards are community cards and the betting opportunity will come after you deal with each round.

The primary aim of the game is to create the best five-hand combination – with or without your hold cards. In Texas Hold’em poker, it’s suggested that you fold your hand if your hand is poor, so that you don’t have to bet more money on it. But, if you can bluff your opponents well enough, then you can force your opponents to fold before you. And the last player standing after everyone folds is the winner that takes the pot.

Five-O-Poker can be termed as a very similar type of poker to Texas Hold’em, except, you have to play five cards at a time, instead of just dealing with one card at a time. Each player is provided with five cards and out of those five cards, only one will be face down and others face up. The players must ensure that they have the strongest possible hand.

After a round of betting, the hands of each player will be matched with each other and the player who has the strongest hand in at least three out of five hands will be crowned as the winner (unless a player folds beforehand). And if a player is lucky enough to win all the five hands, then it’s called Five-O.

Countdown poker is also a five-card poker game similar to Five-O-Poker. In this poker variation, every player is provided with five cards – face down. Once the bets are placed, each player will have the chance to replace any three cards from his or her hand.

Once the final card-replacing round takes place, the final round of betting will begin and after that, every player has to show his or her hand. And the player who will have the highest hand ranking will win the pot.

Compared to the previously mentioned poker variations, Follow The Queen is a seven-card poker game. The game pattern is quite similar to the 7-Card Stud variant, but there are a few twists that you should know about.

In this poker variation, special abilities are provided to the Queen cards. Hence, any queen card that is dealt face-up will be a wild card and therefore can be utilised as a substitute for any of the seven cards in your hand. The goal is to create a winning combination using all the seven cards in your hand. But, that’s not all though because the next card immediately provided after the Queen also becomes a wild card and that’s why the game is known as ‘Follow The Queen’.

Pineapple isn’t just a tropical fruit anymore because it’s also the name of a popular poker variation. The rules are very easy to understand & learn and if you already know how to play Texas Hold’em, you’ll be right at home with this variant. The only difference is that – instead of dealing with two hole cards (as in the case of Texas Hold’em) – you have to deal with three hole cards.

The Pineapple poker variation can be extremely entertaining to play because of the additional hole card that players have to deal with – meaning that there’s a chance that you might have a starting strong hand.

There’s no doubt that the rules of different online poker variations can be confusing. But, once you start playing a couple of poker sequences, you’ll slowly get used to the rules of that particular poker variation and thereby enjoy it a lot more than you thought initially. Finally, if you have any further queries, don’t hesitate to ask us away.

Previous articleHow To Crush Real Money Games In 2022?
Next articleSuggestions To Enhance Your 3 Patti Playing Skills