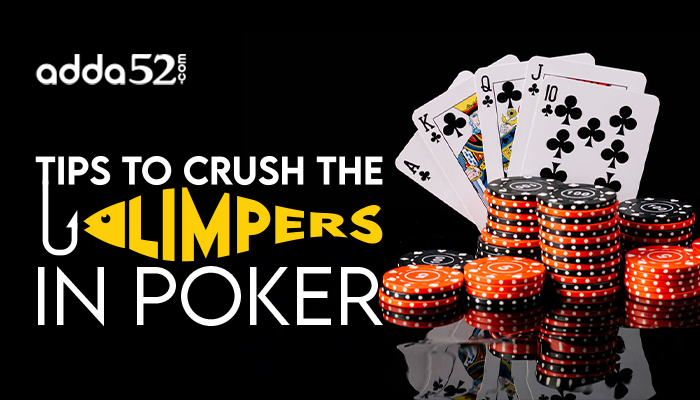 When playing card games online such as Poker, a lot of players do not know how to play against these limpers and hence end up losing the money. First, let’s understand what limpers are? Well, the limpers are the players who make money by just calling and not raising any bet. He is said to be limping in the pot. In this article, we are going to tell you how to play against these limpers and what strategy you could hold to beat them.

Realize that most people limp with the same ranges, most limpers have “straightforward” ranges. This means they are usually raising their best hands and limping with the hands they don’t consider to be good enough to raise. Tight players may only think hands like pocket nines are better than ace-jack and better are good enough to raise. This means that tier limping range includes hands like ace-10, king-queen, king-jack, queen-10.  Against them, raise with roughly the same range you would normally raise based on your position. Do not get too out of line. Be more cautious as there are more players yet to act.

You should be especially prone to raise with a strong, linear range of your best hands. Very often when someone raises in you, you should be re-raising with a polarised range meaning your best hands and your hands are not quite good enough to call. Because when they call your re-raise with the poker chips in hand, you either want to have an up hand they can happily put money in the pot or a bluff type that you don’t care if your opponent bluffs. But again it’s limpers quite often you just want to raise a straight-up linear range or just your best hands. You can of course mix in some bluffs especially with junky suited connectors or whatnot but your best hands should pretty much always be raised. Because these are going to your big cards and your big pairs. Not to extract value with these hands, which is accomplished by raising. “Slow playing” does not have much merit. Junky big cards like to get heads-up or win pre-flop.

We should call with the poker hands that have applied on it such as suited Aces, suited connectors, and small pairs. These are the hands that want to see the flop and make either the nuts or a good draw. They don’t want to screw up the scenario by raising in and getting erased unless they are very strong. So, don’t do anything to mess that up. Whenever you know the straightforward players are not going to limp, re-raising very often, you can raise the hands like Queen jack because there’s gonna call frequently and you’re gonna have them in bad shape. But, if you think you’re gonna get a limp pre-raised ever you don’t want to be raising that queen suited, it’s fine to limp behind with 8-8 and A-9’s. So, do not think that you have to raise with all playable hands. So many players get in their minds to raise the limpers. But, this is not a great strategy. It is a great strategy if your opponents are going to fold way too often.

Your opponent’s limping range has become more reasonable and you just cannot play junk. Even marginal connectors are not green to play like 8-7 offsuit. It is not a good hand to play. Fold the hands like A-6o, K-8o, and 10-9o from early and middle positions. Those are simply not good. Fold these hands if it goes limp. If you have these hands in the middle position, don’t put a chip in the pot with it, just fold sometimes. You are going to get raised and you will have to fold or call from out of position which is not great even when you do see a flop. Only 10-9o is playable from the button, not even in the cutoff, so if it goes limp in and if you are on the button with 10-9, you can surely limp. Also don’t feel like you must raise a hand like  A-6o on the button because you might think it’s the best but it is just going to cost you tons of money.

You will find scenarios where you just think that something is up. So only play premium hands and implied odd hands against a likely trap. Remember, it is fine to limp behind. Realize that some players trap way more than others. If you are only rarely getting trapped then play normally. If you feel that it is happening infrequently just play normal hands but recognize that some players do trap way more often than others and you should adjust accordingly. Remember people limp with different ranges and if you expect you are getting trapped, find a limp behind with otherwise very strong hands that pretty much needs to be raised. If you find scenarios where it is not just a good spot to raise, so you have to be able to adjust. Poker is all about playing fundamentally sound and then just adjusting to taking advantage of whatever your opponents do incorrectly with skills and strategies. Also, you want to take the rake into account. A lot of small-stakes cash games rake a lot and if you see a flop they take a certain amount as a rake. So, if someone limps you shouldn’t play if you are on the button.

So join the game and register to get an instant sign-up bonus poker on Adda52.