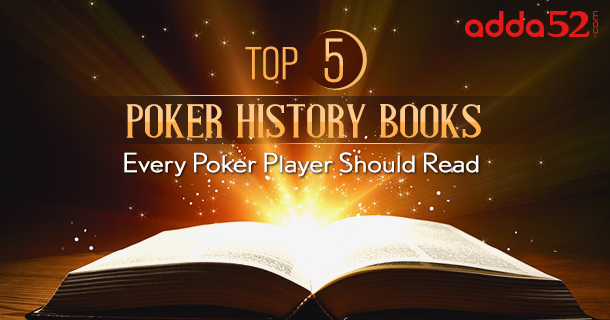 The history of poker is tough to find out. The knowledge of this game before poker boom was typically passed down in the form stories told at tables, as there was no internet, no media and no television in those times. The stories narrated at the tables later turned into fascinating poker history books. I take you through some of the most loved and read poker history books, which include the followings:

1. The Godfather of Poker

A fascinating book that takes you through the history of American treasure and the greatest poker player of all time Doyle Brunson. It is a gripping story of guts and glory, of good luck and bad, of victory and tragedy. Brunson bluffed death, survived whippings, gun fights, stabbings, mobsters, murderers, etc. He suffered from incurable cancer but the fate never played poker with him- he survived. The book throws light on the poker in the 1950-1960 era when it was simply illegal in Texas. It talks about an era when there were no computers for simulating hands, and no levels in the game. That time, there was no protection from hijackers. If you are looking to read a good book, do try it!

Gardena Poker Clubs: A High Stakes History by Max Votolato throws light on California poker scene. The book is set in Gardena where the gamblers flocked to even in the times of the Great Depression. It is a story of Ernie Primm who fought for the legalization of the draw poker and established six iconic card clubs, which thrived for generations and earned lots of revenue. It also carries a fascinating tale of Russ Miller who rose high in his career from Edgemont Club bouncer to owner of the Normandie Club. In general, it is a book based on the legality of poker and rise and fall of clubs in California. This is the newest book on the list published in 2017. It is fascinating read for anyone interested in poker.

The 3rd most popular book that belongs to the poker history category is Alvarez’s Biggest Game In Town. It is a quick and entertaining read that focuses on author’s time and experiences at the 1981 World Series of Poker. It also takes you through high stake games in Las Vegas where road gamblers and local poker professionals won and lost fortunes on a regular basis. Although it is more about the biggest tournament – The World Series of Poker (WSOP), it will also introduce you to the legendary poker characters, from Doyle Brunson and Chip Reese to the famous Eric Drache and the Binions.

4.Cowboys Full: The Story Of Poker

Written by James McManus, it is a kind of poker encyclopedia, which takes you through the history of poker roots in China, the Middle East, Europe and USA to its ascent as a global phenomenon. The book describes how the early Americans turned a French parlor game into a national craze by the time of the Civil War. From the kitchen-table of ordinary citizens to its impact on the generals and diplomats, poker went on to catch the nerves of the great politicians from Abraham Lincoln to Barack Obama. Cowboys Full shows how once called the cheater’s game has become a profession for thousands of people. The book explains how poker, formerly dominated by card sharps, is now the most popular game in Europe, Asia, Australia, South America, and cyberspace, and on television.

5.Knights Of The Green Cloth

Written by Robert K. DeArment, this book is an overview of the earliest days of poker and the lives of professional players. It is a history book that reads much like a novel. The book not only talks about the famous and infamous names in poker, but also about the boom towns, the cattle drives, silver and gold mine strikes, the square gamblers, the cheaters, the reformers, and many others characters in America’s history. It is an interesting book to read for all types of readers, not just poker players.