How to Spot a Bluff on Poker Cash Game Table 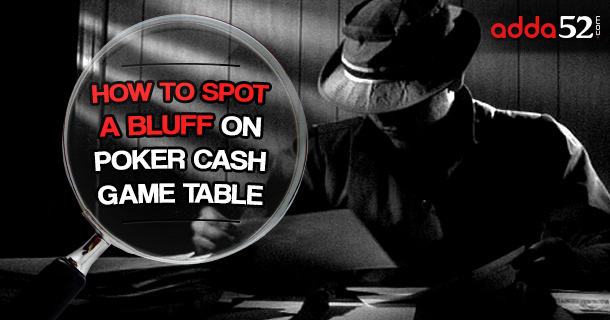 You must have heard the name of the Bollywood movie of the 60s era ‘Bluff Master’ starring Shammi Kapoor and with the same title in the year 2005 starring Abhishek Bachchan. If you have watched any of these two movies then you must have got an idea that the term ‘bluff’ is related to the game of poker, and it is something that requires skills to master. But what really is the meaning of bluff in poker, how is it related to poker, and is it applicable in the poker game played online. Let’s go ahead and try to find out what is bluff in poker game. The act of bluffing in poker or card game is so much negatively glamorize by the movie industry that it is considered to be something against the rules of the game of poker. In fact, you would be surprised to know that bluffing is an element which is very important to a poker game.

When it comes to playing poker, the main objective of each player around the poker table is to win. Bluffing in poker is the art of deceiving your opponent, and it is used by professionals to beat their opponents when they are not in a good position to win the game. It is because of using this ultimate art of deception called bluffing that many players have won a game of poker that was going in favor of the opponent.

Read More:Advance strategies to master in the art of bluffing.

In simple words, you can say that the act of bluffing is to confuse your opponent by faking a move and faking his facial expressions to hide his real motives or moves, and it is very much legal to do so. Now this art of bluffing can even be used by your opponent while playing poker. To avoid being deceived or lured by your opponent in making the wrong move, it is very important to spot a bluff on a poker game table where cash is on stake. Here are some tips that can help you to spot bluff in a poker cash game and avoid getting bluffed by others in a poker game where money is on stake.

Here are some tips that can help you to spot bluff in a poker cash game and avoid getting bluffed by others in a poker game where money is on stake.

Keep an eye for semi-bluffs: While playing poker, if the player opposite you is trying to draw cards from the bottom pair, then he might be thinking of drawing a set when your turn comes. He must be using the technique of bluffing knowing that you have not yet made a pair, and might come out as winner during the showdown. Therefore, make it a point to keep an eye for semi-bluffs. Despite knowing that he do not have a strong hand, if your opponent is still betting then it is an indication that he would bluff in his next turn.

Catch the intimidating moves: If your rival poker player is about to bluff then it would be natural for him to appear intimidating so that he can force you to fold the hand away. His intimidating moves can be in the form of a long stare, verbal outburst, or throwing his chips on the poker table. If you catch any of such activities, it can be an indication that his next move would be a bluff game.

Keen observation is the key: It is very important to keenly observe the playing tactics of the player with whom you are going to play poker. Before going to sit across a poker table with any particular player, you should devote some time to get some insights into his game play. This will help you in preparing yourself to understand and know in advance when he is going to use the technique of bluffing while playing in real with you. Notice each and every move of his minutely, note down when he bluffed while playing poker with others. Also, read carefully his body movements. He will definitely give you some clue, which you have to keep in mind while playing with him.