Transitioning from Hold’em to Omaha 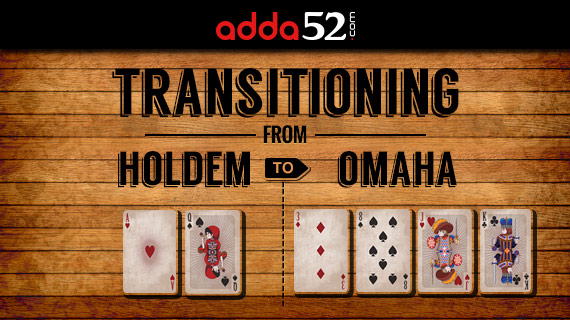 Share
Facebook
Twitter
Pinterest
WhatsApp
PokerPoker Strategy
Omaha is a discreet poker game that is full of action and offers profit making possibility to the players. Many poker players hold off from playing Omaha games thinking that the game is complex and confusing. Texas Hold’em and Omaha are two most popular variants of poker. If you are a Texas Hold’em player and planning to switch to Omaha, you will realize that it’s a different game that requires a distinctive approach. So, when you switch over to play Omaha, you should be aware of common mistakes that tend to trip up amateur Omaha players.
The first and most thing you need to know about Omaha is that the power dynamics between made and drawing hands in the game are very different from Texas Hold’em. It is because of the difference in the number of hole cards that are dealt. In Hold’em, the hand that is in the lead influences the betting, and forces the drawing players to pay to draw while in Omaha, it’s the draw that influences the betting.
The most common mistake that players make while switching to Omaha is that they fail to bet their big draws aggressively. Most of the top draws in Omaha are good of surpassing the betting all the way to the river, especially if there are more players in action. If you are a tight Hold’em player, you need to learn to smash it with the right draws to be a winning player in Omaha.
The next mistake that players make is of overvaluing their five-card hand combination as they are evaluating their hand’s strength according to Hold’em rules. For example, if you want to flop top and bottom pair in a Hold’em game, you should have a strong hand and should probably bet aggressively. With the sheer number of cards in play, reading hands in Omaha can be confusing for the amateur players. In Omaha games hitting the top and bottom pair on the flop is a scrap. So, to be a winning player in Omaha, you need to vary the hands as per their value / strength in order to bet strategically and ultimately to win the pot. Moreover, two pair or a set can make you win the pot in Hold’em while a two pair or a set will not hold up in Omaha if a full house is not completed.

The last, but not the least, mistake that the Hold’em players make is that they don’t follow the Cardinal Rule of Omaha. While playing Omaha games, a player needs to use exactly two out of their four hole cards and three out of five community cards on the board to form a five-card hand combination. No other five card combination is allowed in this game. For instance, if you are dealt A♠K♦8♦2 ♦ and cards on the board read 4♠8♠T♠2♠5♦, then you cannot hit the flush as per the cardinal rule, instead you can make 8♦8♠2♦2♠T♠. Likewise, if you are holding J♠T♦ in Texas Hold’em, and the board read J♥J♣4♥4♣2♠, you can play only one card- J♠, and make a full house- Jacks full of fours.

Therefore, when switching to Omaha, the above mistakes should be avoided by acquainting yourself with differences that exist between the games. Furthermore, you should always remember the Cardinal Rule of Omaha: Always use two cards from your hand and three cards from the board to maximize your winnings at the tables.