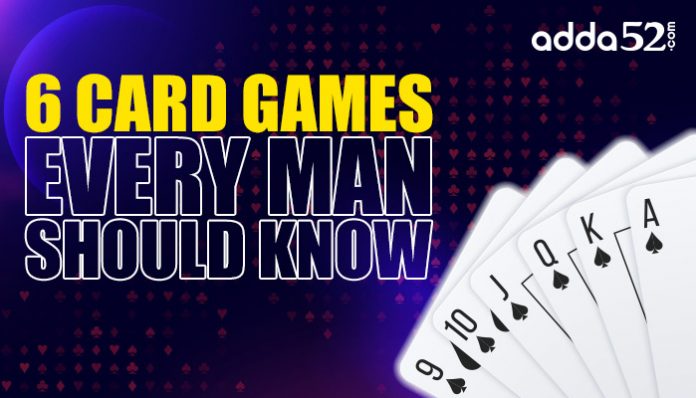 Card games have been a staple of social gatherings for centuries. Not only are they a great way to pass the time, but they also provide a fun and engaging way for people to connect with one another. Whether you’re a seasoned pro or a complete beginner, there are certain card games that every man should know how to play.

In this blog post, we’ll take a look at six of the most popular and enduring card games that every man should have in his arsenal. From the classic game of poker to the strategic game of bridge, these games are sure to impress your friends and make you the life of the party. So, let’s get started and discover the best card games that every man should know how to play.

As you become more experienced, you can start to develop your own unique playing style and strategies. Poker is not only a game of skill and strategy but also a game of psychology. To be successful at poker, you need to be able to read your opponents and understand their tendencies and tells. You also need to be able to bluff effectively and know when to call, raise or fold.

Rummy can be played with 2 or more players, and it’s a popular game to play with family and friends. The game can be played with standard decks of cards, or with specialized Rummy tiles. Online Rummy is also gaining popularity, making the game more accessible than ever before.

Call Break is played primarily in South Asia and Nepal. It is similar to the game of Spades, which is popular in the United States. The objective of the game is to win tricks by playing the highest-ranking card of the same suit as the lead card. Call Break is traditionally played with four players, with each player receiving 13 cards from a standard deck of 52 cards.

The game starts with each player calling or declaring the number of tricks they think they will win. Call Break is a fast-paced and exciting game that requires skill, strategy, and a bit of luck. It is popular among family and friends and is a great game to play during social gatherings. It can also be found online, giving the chance for players to play with others from different parts of the world.

Teen Patti is a popular Indian card game that is played with three cards. The name “Teen Patti” literally means “three cards” in Hindi. It is also known as Flush or Flash in English. The game is similar to the Western card game of Three Card Poker and is often played during social and family gatherings. The objective of Teen Patti is to have the best three-card handout of all the players at the table.

The game starts with each player placing a wager, and then each player is dealt three cards face-down. Players then have the option to “play” or “fold” based on the strength of their hand. The player with the best hand at the end of the round wins the pot. Teen Patti is a game that requires skill, strategy, and luck. The order of the hand rankings in Teen Patti is different than in traditional poker. The game also involves a lot of bluffing and psychology, making it even more engaging.

Spider Solitaire is a single-player card game that is played with two decks of cards. The objective of the game is to clear all the cards from the table by creating runs of cards in descending order, from King to Ace, of the same suit. The game starts with the player being dealt ten columns of cards, with six cards in the first four columns, and five cards in the remaining six columns.

The player’s goal is to move the cards to create runs in descending order of the same suit, starting with the King. Spider Solitaire is a game of strategy and patience, as the player must carefully plan their moves in order to create runs and clear the table. The game has different levels of difficulty, and as the player progresses through the levels, the number of suits increases and the game becomes more challenging.

Hearts is a trick-taking card game that is played with four players using a standard deck of 52 cards. The objective of the game is to have the lowest point total at the end of the round. Points are earned by capturing certain cards, specifically the hearts and the queen of spades, during the play of the hand. The game starts with each player receiving 13 cards. The player holding the two of clubs must lead with it in the first trick.

During the play of each trick, players must follow suit if able, with the highest card of the suit led winning the trick. The winner of the trick leads to the next trick. The hearts card game is a classic card game that is enjoyed by players of all ages. It requires skill, strategy, and a bit of luck, making it a great game to play with family and friends during social gatherings. It’s also popular online, giving players the ability to play with others from different parts of the world.

Card games have been a beloved pastime for centuries, providing entertainment and a way to connect with others. In this blog post, we’ve highlighted six card games that every man should know how to play: Poker, Rummy, Call Break, Teen Patti, Spider Solitaire, and Hearts. Each of these games offers a unique set of rules and strategies, providing hours of entertainment and the opportunity to improve your skills. With so many card games to choose from, there’s something for everyone to enjoy. So, grab a deck of cards, gather your friends and family, and let the games begin!