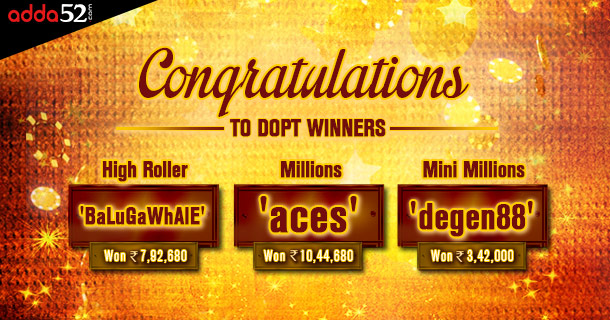 Yesterday saw the conclusion of the Deltin Online Poker Tournament (DOPT), a 5-day series that featured Rs. 10 Million in GTD and ran from 23rd to 27th March on India’s largest poker site- Adda52.com. The series saw outstanding turnouts and massive prize pools being awarded over the course of 5 days across 34 events. One of the key attractions was DOPT 20 Lac High Roller, an online charity poker tourney on 24th March wherein BaLuGaWhAlE emerged the ultimate winner. The biggest tournament of the series was DOPT 40 Lac Millions on 26th March and it was taken down by aces. In DOPT Mini Million, which took place on 25th March, it was degen88 who came on to the top.

The DOPT 20 Lac High Roller was a charity event on 24th March. The aim of this online tourney was to support the cause of World For All Animal Care & Adoptions, a Mumbai-based animal welfare NGO, which seeks to improve the lives of the stray animals. The event saw a turn-out of 120 entries, taking the total prize pool up to an impressive Rs. 2640000. After 8 hours of the rigorous play, it was BaLuGaWhAlE who emerged the ultimate winner, taking home Rs. 792000 in the first place prize.

In the heads-up game, BaLuGaWhAlE defeated Acceleration who finished runner-up for Rs. 501600. In this tourney, the top 12 players were paid out with min-cash of Rs. 46200 going to tushmakster. The final hand saw BaLuGaWhAlE moving all-in with Ac-Ks and aceleration calling with 4c-4d. The board delivered 5h-8c-8c-Kh-Ad, thus giving balugawhale the coveted 20K High Roller title with two pairs. Since 20 Lac High Roller was a charity event to support the cause of animal welfare, Adda52 matched the prize pool collected via this online poker tournament and donated it to World for All foundation.

The DOPT series had several crucial events, though, the 40 Lac Millions- Main Event on 26th March was the highlight of the series. This event proved a grand success, as it drew a huge field of 287 entries and created a total prize pool of a whopping Rs. 4018000, which was distributed among top 27 players with min-cash being Rs. 24108. After several hours of the highly competitive play, it was ‘ aces’ who outlasted the entire field to claim the main event title for Rs. 1044680. He defeated SIDDHU24 who took home Rs. 662970 for his 2nd place finish. The final hand of the event took place with blinds of 60000/120000 and ante 20000 wherein ‘SIDDHU24’ in the small blind moved all-in with his 3h-3s and ‘aces’ in the big blind made the quick call with his Js-Ad. The community cards ran out  8c-Ac-9c-Kh-Kd, giving ‘ aces’ two pairs to knock out SIDDHU24 and win the Millions Main Event title.

The other crucial event on DOPT schedule was 10 Lac Mini Millions, which took place on 25th March on Adda52.com. It attracted an impressive field of 230 entries, taking the prize pool up to Rs. 1150000, which was distributed among top 12 players with min-cash of Rs. 20125, which went to pokerdonk21. The man who came on to the top in this event was degen88. He defeated Sammybulldog in the heads-up to claim the first place prize money of Rs. 3,45,000. On the final hand,degen88’s 10h-7c defeated Sammybulldog’s 9h-3d on the board of Ac-5c-Ks-Kh-Jh to claim his first Mini Millions title.

Adda52.com congratulates all the winners and in the money players and at the same time thanks to all the participants for playing across various events and making the inaugural DOPT a grand success.