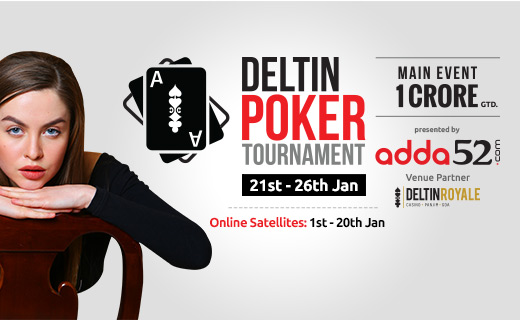 This New Year Adda52.com is setting a new record for the biggest-ever tournament – the first live poker tournament in India to reach a INR 1.5 Crore in guaranteed prize pool. Two poker giants of India- Adda52.com, India’s largest poker site and Deltin Royale, the biggest floating casino in Goa have joined hands to organize a “Deltin Poker Tournament Presented by Adda52.com” – 6-day poker extravaganza that will bring INR 1.5 Crore in guaranteed prize pool across 5 events starting 21st January. Adda52.com is the pioneer and the market leader in the Indian online poker arena and is known to conducting huge online tournaments month on month with millions in guarantees. The tournament legacy is now taken to physical tournaments with the ‘Deltin Poker Tournament presented by Adda52’ in Goa. Here is the brief schedule of the 6 day extravaganza:

There are many online satellites being planned around this poker extravaganza, and online MTT grinders of the country are already taking a shot of this biggest ever live poker tournament. The daily satellite event – “DPT 1 Cr Step 1 Satellite” with buy in of Rs. 200 has started on January 2, and is attracting large number of poker players. The daily satellites will run till January 17, and anybody who does not get entry to the finale through these daily satellites has an option to play the Mega DPT Main Satellite, DPT 1 Cr Main Satellite and Super Satellites.

India’s largest poker site has been setting new standards and smashing records since 2011. One of the biggest achievements came in September 2014 when Adda52.com hosted Poker Millionaire Tour – India’s largest-ever online poker tournament with 1.3 crore guaranteed prize pool. But now it’s time to aim higher than ever before, and you can help us make history once again. Also, don’t miss out on joining Team Spades and thousands of others in the biggest live poker tournament of all time, rather it would be the largest live poker tournament ever held in India.

Previous articlePlay Poker at Adda52.com and Fly to Vegas
Next articlePoker and Chess