One of the popular card games played in India is Court Piece, also known as coat peace or kot pees, pees being a Hindi word meaning “to deal”. In Pakistan, this game is often known as Rang, which means “trump”. In some places, for example in Goa, it is called Seven Hands. In India, the English word “hand” is sometimes used to mean a trick i.e. a set of cards, one played by each player in turn. A variant of whist (a classic English trick-taking card game) in which eldest hand makes trumps after the first five cards have been dealt and trick-play is normally stopped after one team has won seven hands. A special bonus is given if a particular team wins the first seven hands or even all hands. The game is played by four players in two teams, but there are variations for two or three players as well. 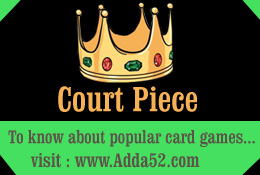 There are four players in fixed partnerships, partners sitting opposite. The deal & the play are anticlockwise. The dealer shuffles and the player to dealer’s right, known as the “trump-caller”, cuts. The dealer deals a set of five cards to each player. The ‘trump-caller’ player looks at his or her five cards and (without communication with any of his partners) chooses and announces the trump. Then the dealer deals out all the remaining cards in batches of four, so that everyone has 13 cards.

The object of the game is to score courts (coats, kots) by winning the majority of the tricks (hands). Whenever a court is scored, the number of consecutive deals won is reset to zero. A team that scores a court by winning the first seven tricks can carry on and try to win all 13 tricks. This extremely rare achievement is known as a “52-court”. There is no penalty for carrying on after seven tricks and failing to win all thirteen. But to save time, normally the play is ended when one team has won seven tricks. The overall winners of the session are the team that has scored most courts after an agreed length of time.

Derived games have added features such as the 2 of hearts as the highest trump (like in Satat, which is a popular card game played in Mauritius. Its name comes from the Hindi words “saat haant” meaning “seven hands”). Another derivation of Court Piece is Dehla Pakad, in which there is a need to count tens rather than tricks.