Crazy Poker Facts That Will Blow Your Mind 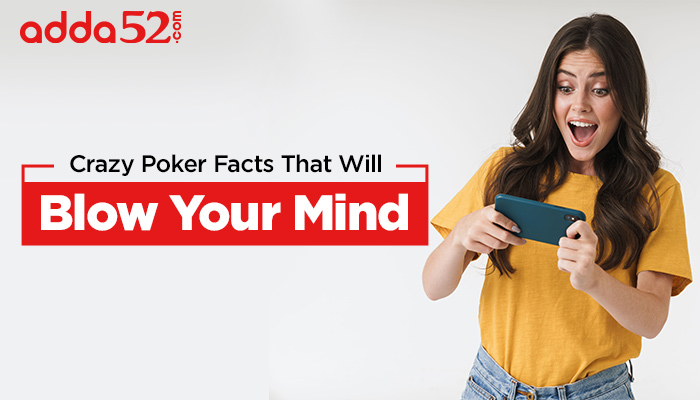 The only game which is hit in the brick and motor setup and the online world is “Poker”. The millions of intelligent minds playing this game across the world itself speak volumes about the popularity of poker. The skill factor involved in the equation makes the game thrilling and interesting. Poker has been around for 200 odd years, but some poker facts may blow your mind and convince you to think about this game a little more and play poker online games with friends.

It is impossible to trace down the exact origin of poker, but historians confirm that the game was developed in the Louisiana area. While some historians believe that poker’s origins can be traced to a domino-card game played by a Chinese emperor in the 10th century; others claim it is a descendant of the Persian card game ‘As Nas’. Poque is believed to be the closest European predecessor of poker, which caught on in France in the 17th century. Poque and its German equivalent, pochen, were both based on the 16th-century Spanish game primero. Poque is brought by the French colonists in North America, including New Orleans and the surrounding area, which became part of the United States.

In today’s time, poker is played with a standard deck of 52 cards, but back then, it was played with a deck of twenty cards and four players. The game used to be less convoluted. Each player was dealt with five cards and the betting would begin on who had the best hand. It has been said that the 52 card deck was first integrated as a whole in the game from 1834 onwards.

FACT #3: A game of Poker once lasted nearly eight and a half years

We are thriving in a world that is fast-paced and hectic. With the inception of online poker, the game is also time-bound so that players can get some time to manage their other tasks as well. But back then, there was a time where people used to play the game for days. The Bird Cage Theatre in Arizona is believed to be the place where the game lasted for almost 8 and a half years. The game began in 1881 and lasted a staggering eight years, five months and three days. According to the Bird Cage Theatre, the players were all well-known featuring personalities similar to ‘wild west’ and the minimum buy-in was $1000. Crazy, isn’t it?

FACT #4: Poker used to be played for gold nuggets and coins

Players used to play poker to get gold nuggets, gold coins, and gold chips. As these were difficult to standardize units, the requirement for a standard unit appeared after some time. After this, various gaming houses came up with the concept of poker chips. These poker chips were made of wood, ivory, bone, clay, etc. with designs to show its value. These coins used to be exchanged for real money right at the gaming house (the same way it works in casinos these days).

Considering the above facts, we can say that poker has come a long way! From players playing it for gold nuggets to now joining an online cash table within minutes, the journey has been exceptional. How will this game of skill evolve in the future? We can only mull over the fact and play poker online to make some relevant predictions.

Play at Adda52 and get a 100% bonus offer in poker and amazing rewards.