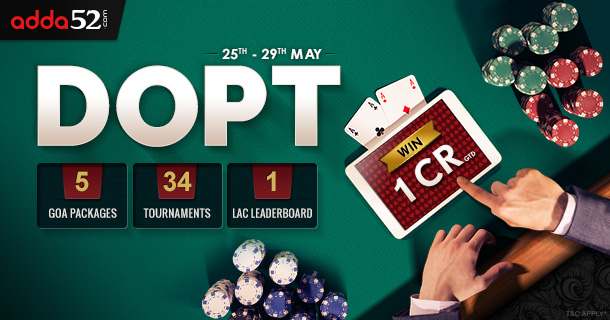 After the success of the Deltin Poker Tournament (DPT), India’s largest poker site-Adda52.com is here again to reward the online experience of the players with the 2nd edition of Deltin Online Poker Tournament (DOPT), a 5-day online tournament series that promises a massive prize pool GTD of Rs. 1 crore, which makes it one of the richest online events on Adda52.com. The upcoming DOPT series, which players eagerly await, kicks off on Thursday 25th May and will run through 29th May this month.

The Deltin Online Poker Tournament on Adda52.com is a series for everyone with a total of 34 events in interesting variants and formats. What makes it even more exciting is the fact that it features a 1 Lac DOPT Leaderboard, which seeks to award 10 top-performing players for their wonderful showing across the series. The surprises don’t end here- there are 5 Goa packages up for grabs. Yes, the DOPT  also features the five biggest online tourneys, namely DOPT Blaze, DOPT High Roller, DOPT Mini-Millions, DOPT Millions-Main Event and DPT PLO showdown, which carry a total of Rs. 80 Lacs in the cumulative prize pool GTD. The ultimate winners of these tourneys will not only be able to win huge prizes but they will also be able to get complimentary 4 Days, 3 Nights Goa stay & play packages.

The DOPT kicks off on 25th May with several low to medium buy-in events, including DOPT Blaze at 9:30 PM, which features a buy-in of Rs. 2500 and boasts of Rs. 5 lacs in prize pool guarantee along with a Goa package up for grab. On 26th May, the series brings DOPT High Roller, the biggest event of that day, which is scheduled for 9:30 PM and carries an impressive Rs. 20 lacs in the prize pool guarantee with a Goa stay & play package for a buy-in of Rs. 22000. Up next, players will be able to take part in DOPT Mini Millions, which is again scheduled at 9:30 PM on 27th May. The Mini- Millions features a guaranteed prize pool of Rs. 10 lacs along with a Goa play & stay package. Later, 28th May brings the biggest event- DOPT Millions-Main Event which promises a whopping Rs. 40 lacs in the prize pool along with a play and stay Goa package for a normal buy-in of Rs. 14000. Finally, the series concludes on 29th May with the biggest event of the day-PLO Showdown at 9:30 PM, which promises Rs. 5 lacs in total prize pool guarantee along with Goa play and stay package for the ultimate winner.

To the delight of poker enthusiasts, the Deltin Online Poker Tournament also features a DOPT Fantasy which promises Rs. 1 lac in prizes across 2 leagues of Fantasy. You have an option to create your own team from the draft of top 100 players and win from Rs. 1 Lac in prize pool. You can create 2 different teams and hence maximize your chances of winning. The best part is that you can include yourself in your team even if you are not a part of top 100 players. Team creation and Leagues entries start today and are allowed only till 24th May. So, hurry up and create your dream to win from Rs. 1 lac.