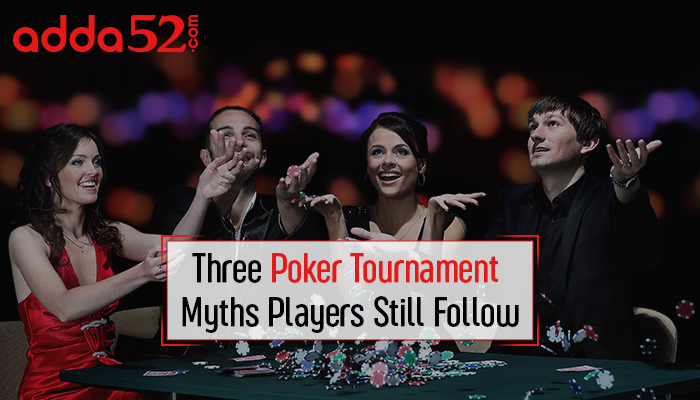 In present day world, the life is dependent on opinions. You will find many people who share their life experiences as absolute truth. This scenario is very common in the game of poker. While playing poker, you will get to hear plenty of weird myths and false truth. And, you will come across hordes of players who are just unlucky in poker, and think they have it all figured out. Here are the three myths that still prevail in poker tournament circuit:

Some tournament players believe that big stack is required to put pressure on your opponents, and the player with biggest stack is assumed to be table captain. But, why do people forget that poker is a gamer of skill. It is not like soccer game where one sets a plan to execute on the field. For instance, you hold a big stack, and have reached Day 2 of the WSOP Main Event. The players sitting left to you have lesser chips. So, being the table captain will you strike your opponents’ blinds with any two cards or play your own game.

Always remember this quote by William Ernest Henley, “I am the master of my fate, I am the captain of my soul.” Each poker hand you play is an individual challenge, and you have to play it to bet of your ability. And, stack size is not the only factor to be considered while playing a poker hand. So, get out of that black white approach where big stack means aggressive and short stack means tight.

Avoid Defending the Big Blind If Under 10 Blinds

In poker rooms, you will bump into regular ‘know-it-all’ players who may make the game tough for you. They may push you over defending from the big blind with a short stack. For instance, you are dealt T-9o, and you levelled your opponent’s open in the big blind. Then, you hit a pair on the flop, go all-in, and double up. These players will not judge your pre-flop play. It’s perfectly okay if you use a smaller open-raise size. And, when you’re in the big blind facing a minimum raise open, you only need 20% raw equity to continue.  So, if you hold a small stack size, it is simpler to play your hand post-flop and realize equity.

Play for the Win

This one you will hear from most of the players who have dropkicked their stack in the mid stages of live tournaments. Such players usually lose their chips in a hand that they decided they needed to win at all costs. And post explanation they give is “I had to play for the win.” And the best counter phrase for such situation is “You can’t win a poker tournament on the first day, you can only lose it.” As a professional poker player, your job is to play fundamentally strong poker, follow poker rules and adjusting your game play to beat your opponents. Sometimes, you need to play hyper-aggressively and sometimes you have to keep it tight. Let’s take an example here:

In a tournament, there are 10 million chips in play. The final table average will be 1,000,000 chips with the blinds of roughly 20,000/40,000. Suppose you’re playing 1000-player tournament with buy-in of $1000 and a 10,000-chip starting stack. In the course of tournament, you’re on the river after missing a flush draw. There are 30,000 chips in the pot and you have another 30,000 chips in trail. This 30,000 pot is not valuable if we compare it with that one big blind at the final table. Thus, you don’t need to chase this hand if you actually want to win the tournament. Moreover, one should go all-in or not depends on many factors and not just on your attitude that “I need to play for the win.”

As we conclude, never forget that there is a break even between planned risks and impromptu moves.  As a tournament player, while you are educating yourself on how to play poker as a pro, you should also learn to embrace both – pay jumping and rare wins. Finally, it’s how you see the big picture defines how successful you’ll eventually become.