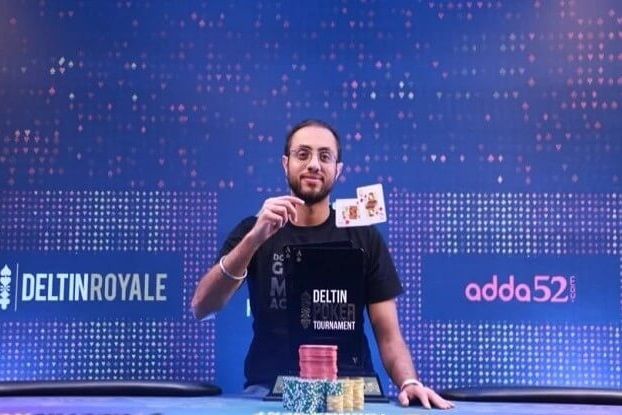 This famous poker player has again reminded everyone why he is widely regarded as one of the best poker players in the country.

Abhishek Goindi has won the DPT February 2019 edition INR 65K Adda52 High Roller event at the Deltin Royale Casino in Goa by outlasting the strong field of 86 entries in style. He defeated Pradeep Sharma in the heads-up confrontation to secure the title and walk away with the INR 14,50,000 top prize. Sharma settled for 9,90,000 for his 2nd place finish.

Goindi was among the four late registrants who joined the event on Day 2 but he successfully managed to secure his way to the final table.

Goindi started his journey on the final table with the second-biggest chip stack (5,67,000), behind only Shashank Jain’s 9,94,000. Ujjwal Narwal and Jayjit Jay were first two players to bust from the table at the hands of Somashekar KM at 9th and 8thplace respectively. Somashekar finished off Alok Birewar at the 7th position. Eka Vedantam was railed in 6th place by Joey Saha and Somashekar followed him. Saha also had to exit the table at the fourth position. When Shashank Jain got eliminated at the 3rd place, Goindi started the heads-up with Pradeep Sharma which lasted for about half an hour.

This is Goindi’s career-best live cash score in India. Hailing from Bangalore, Goindi is a well-known name in the poker circuit. He has participated in several major national and international poker tournaments such as Indian Poker Championship, Asian Poker Tour, Asia Pacific Poker Tour, World Poker Tour, etc. He was the first Indian player who made remarkable cash winning at the Macau Poker Cup. He finished runner up in the 2012 Macau Poker Cup HK$11,000 NLHE Red Dragon Main Event and pocketed his best live cash of $136,303 (INR 96,97,306). He also won the ₱ 100,000 + 8,000 NLH High Roller at APT Manila and earned $39,773 first prize money.

Last year, he participated in Adda52 Chip-Up Series and emerged as the ultimate winner by beating a field of 794 entries. He defeated Amerjeet Gandhi heads-up and took home the top prize of INR 2,50,000.

Congratulations to all the winners!