The impeccable universal popularity of card games around the world has forced Indian card game lovers too to come up with new and exciting online platforms where people can play their favorite card games online with their friends, family or even strangers. 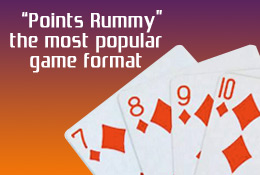 What’s the most distinctive attribute of this game is that you never get bored of it as it keeps your brain stimulating throughout the game. Though rummy game has many variants which can be played in different formats, but points rummy is the most popular and preferred format among all rummy game formats. It is also known as strikes rummy.

The most interesting aspect of points rummy format is that it is quick and needs a high level of expertise as each deal is a game with a winner at the end, pocketing chips/cash won from his opponents. There is a pre-determined rupee-value attached to each point played in the game (also called the multiplier). Moreover, depending on the cards and the player’s competence, there is no limit to how many games a player can win in a very short span of time that’s why it is considered as the most thrilling format among all forms of Rummy.

So, if you are looking towards scoring great points, all you need is the right skills to judge the opponent’s behavior and cards. Tricking the opponent and misleading them with your moves is important to win the game & score high points.