As a child, there were many card games that I used to play with my friends. But, one such game that still remains in my memory is Rummy. I used to play Rummy for hours without bothering about the time, food or place. Initially, when my elder cousins used to play Rummy, I found it hard to understand & was a mere spectator. Gradually, I got hold of the basic rules of Rummy and then there was no looking back. I silently took a deck of playing cards from the upper drawer of the cupboard kept in the living room and sneaked out in the afternoons, especially during my summer vacation holidays. I went to the playground opposite my house and sat below the old banyan tree where my friend Rohan was already waiting for me. 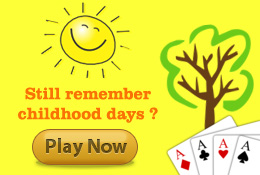 We had a toss to decide who will be the dealer. I had a very bad luck and mostly lost the toss but I still knew that this wouldn’t alter the result. We played for several hours and mostly had a bet that whosoever loses three games in a row will have to buy an ice-cream for the other. Often I made wrong declarations and still Rohan couldn’t figure it out. I told him about his mistake only after I had my share of ice-cream. He would get annoyed and tell me that he would never play with me again but next day he was again on time waiting for me beneath the banyan tree.

Today, though both of us stay in different cities, we still play Rummy together whenever we are free; thanks to online Rummy sites like www.Adda52.com, a place where we can play, bond and share our old childhood memories.