One of the best ways to become a successful Texas Hold’em player is to know which starting hands to play and which to fold. In this blog, we bring you the best starting hands in Texas Holdem poker to help you improve your game. It is to be noted that there is some disagreement over which hands are the best, but it all depends on your skill level and style of play. Also, it should be kept in mind that even a great texas holdem starting hand is likely to turn bad quickly after wrong community cards fall on the board.

Mentioned below are best starting hands in Texas holdem trusted by most poker players widely across the world: 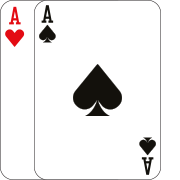 1. Ace-Ace
This is the best starting hand in hold’em poker and can be played from any position-early, middle and late positions. Also known as “Pocket Rockets”, “Bullets” or sometimes “American Airlines”) is the best starting hand for Texas Holdem. Pocket aces are a strong pre-flop favourite over any other two cards, and they are 4:1 favourite over almost any hand in poker. You will be dealt pocket aces once every 221 hands. Though Aces win more than 80%, they are likely to lose against the better one sometimes. 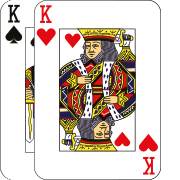 2. King-King
This is the 2nd-best hold’em hand and will win you some big pots. Pocket kings, also known as “cowboys” or “King Kong” are a favourite against any hand except aces. Kings have roughly 70% equity versus any ace. You should be happy to get your money in preflop with pocket kings in poker. 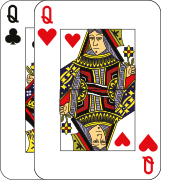 3. Queen-Queen
Two queens, or “ladies” are a very good hand in poker. Yeah, kings and aces will beat you, but you will always have an upper hand over jacks, tens and below cards. While these hands are a great strength pre-flop but they are very difficult to play post-flop especially when some overcards hit the board. 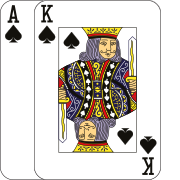 4. Ace-King (suited)
Ace-King is again a premium hand in Texas Holdem. It is one of the strongest drawing hands though, the flop needs to work for you to give you a pair of aces or kings. Ace-King Suited is slightly stronger than unsuited, as you get a chance to hit the nut flush much more easily. It is the strongest unpaired holding and even against KK and holds 34% equity in Texas Holdem. Also known as “big slick,”  or “Anna Kournikova”, it is a favourite as the fourth best-starting hand for Texas Hold ’em players and wins against all pocket pairs half of the time except for the pocket aces and pocket kings. 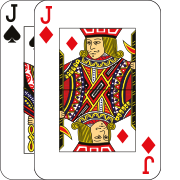 5. Jack-Jack
Also known as “hooks” or “fishhooks”, is again one of the best starting hands in poker. JJ versus AA-QQ and AK-AQs is about 38% underdog. Generally, you will win almost 20% of the time with this hand. If the flop shows a queen, king, or ace, be careful, but otherwise, it is a winning hand for you.

It is a coin-flip (50:50) against any unpaired hand and a strong pre-flop favourite over any lower pocket pair. It is good if the pot is unraised and you hold jacks in the late-position, though you should be a little more careful especially when an opponent has raised the pot from an early position. 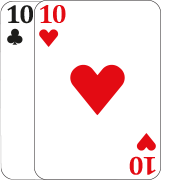 6. 10-10
As favourite as pocket Jacks for some players, pocket tens (aka “dimes”) are a strong starting hand in Texas Holdem poker. You don’t need another 10 on the flop and you can still win with tens. However, if there has been lots of action before you, it is sometimes better to fold pocket tens before the flop. Some poker players believe that a suited king-jack is a much stronger starting hand than Jacks. Pocket tens are highly strong vs two random cards, yet it is very difficult to play just like pocket Jacks. 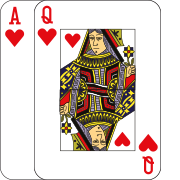 7. Ace-Queen (suited)
Also known as “big chick,” or “little slick,” it is again one of the best starting hands. For many players, it is better than Jacks and Tens and they always keep it above J-J and 10-10 in their rating list. For many, Ace-queen is the second best drawing hand, and when suited, it will win over 20% of the time. Although it is one of the best hands, sometimes you will need to fold even when you hit a pair on the flop. However, if you completely miss out the flop, it is always better to stay out of trouble with it. 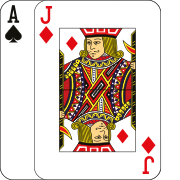 8. Ace-Jack
Like ace-king or ace-queen, if it is suited, this hand can give you a royal flush. However, it is one that is worth playing more carefully, especially when your opponent has raised 3 bets from early position. Any ace-king or ace-queen combination will beat if you pair your Ace, so don’t fall in love with your ace-jack. Generally, it is a good hand and will win about 18% in combination with five up cards. 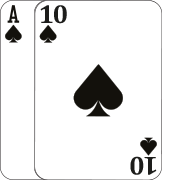 9. Ace-Ten
Ace-ten is still a good hand, as you have got the high card Ace. This can make a straight if the miracle J-Q-K falls on the board. But be careful while playing it too strong, especially if it is unsuited. Generally, it is a good hand with over 17% winning percentage in combination with five up cards. 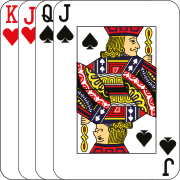 King-jack, especially in later positions, is a good starting hand to play but can be beaten by any of the bigger hands listed above. If somebody raises big before, it is better to fold. Equity-wise, King-Jack suited it will win more than 19% of the time, but the winning percentage for unsuited drops to 15%. So far Queen-Jacks, it will win over 17% in combination with five cards up on the board. While these are profitable starting hands, they need to be played with caution especially when you face big bets.

Learn About the Game of Poker