Position in the game of poker is an order or arrangement in which players are seated around the poker table. This arrangement is further categorized into three categories regarded as Early,Mid and Late Positions.

First, let's have a look at the different Positions on a 9 player poker table which are explained below:

Dealer Button is a point from where the game will start. It is also known as buck. It is a pointer or a marker which indicates the player from where the cards are dealt. This button will automatically move to the player who was small blind(SB) in the previous hand.

If someone has taken a seat between small blind(SB) and big blind(BB), then they will have to wait for one game to let the dealer button pass through them. This is done to make sure that one player does not have to post the big blind twice in a row.

Blinds are the forced bets by the system which the player sitting at these positions will have to post necessarily.

There are two forced bets to be posted by players sitting left of the dealer button explained as below:

This is the first forced bet. The small blind is always set by default. Player on Immediate left of the dealer button posts this blind which is always half of the Big Blind and hence known as “Small Blind”.

The player seated on the immediate left of the big blind is known as UTG or “Under the Gun”. Before Flop round UTG is the first one to act. There is some pressure on a player at this position as it is not that easy to strategize in this situation.

The player sitting immediately to the right of the dealer button is known as Cut off in poker. It is the second-best position in the hand of poker. It is called Cut off because this player has an advantage of bluffing, acting a strong hand or raising the blinds being at the late position.

The player sitting to the immediate right of the “cutoff” and second to the right of the dealer button is known as “Hijack”. This is an excellent position to play your cards from. Players in this position have a chance of stealing the blinds before the early positions.

Now that you have understood the positions in poker you will be able to make strategies to play your hands well. As it is known, poker is a skill based game and has nothing to do with Luck. It’s all mind and strategy that plays. Similarly you can play your best hands when you are seated well in the game of poker. 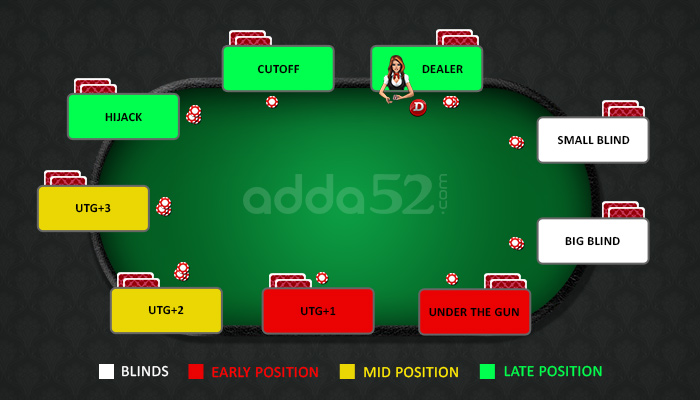 Q. What are the positions in poker?

A. In Poker, position refers to the seating order or an arrangement around the table in which the players are seated on. These are further categorized in Early, late and Middle positions according to the action.

Q. What is Hijack in poker?

A. A position at a poker table that is two seats right of the dealer button is a Hijack. It is one seat to the right of Cut off position.

Q. Which is the best position in poker?

A. The most desirable position in Texas Holdem poker is getting seated “on the button” or Dealer position due to the reason to act in the end of each betting round.

Q. Why position is important in poker?

A. Position plays a vital role in your game strategy while playing Texas Holdem. Playing in position raises your chances of winning the hands against your opponents on the table. You should always play less hands when you are out of position.

Q. Why is it called the Hijack position?

A. This is one of the excellent positions to play your hands from. When you are in hijack position you are known to be playing in position. Players in this seat gets a chance to steal the blinds before everyone else and can hijack two later seat’s actions. Hence it is called Hijack.

Q. What is under the Gun in poker?

A. Abbreviated as UTG, Under the Gun is a position to the immediate left of second forced bet big blind in poker. UTG is the first player to act before the flop round on the table.

Q. What does Blinds mean in poker?

Q. What does Cut off mean in poker?

A. Cut off is a position at a poker table that is immediate right of the dealer button. This is the second best position for a hand after Dealer Button.

Q. What is the role of dealer button in poker?

A. Dealer Button is placed on a table to keep a pointer from where the blinds i.e small blind and blind will start. It is generally a pointer that is shown as “D” on the poker table which keeps moving forward with the hands played.

Q. Which are early and late positions in poker?