Online games are the games played over the Internet, also ranging from single to multiplayer, simple text games to in some cases complex games involving high-end media. Every other day, there is spurge of new applications and games online. This expansion has led to the growth of the Internet itself. Amongst other things, the online gaming scenario in India has also taken a drastic leap forward. 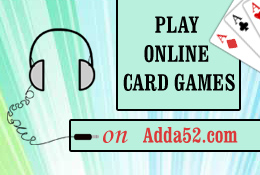 Their gameplay mechanics remain simple with very little or no story involved at all. But, they are usually simple and easy, and you can advance easily for further rounds. Being that the case, online games have a vast share in the daily voluminous online activities. The increase in demand for online games is in sync with the ascend of online social networking. The factor of interaction in these games is one of its strength, especially after the boom of the social networking era. You can always compete with your friends, acquaintances or to say any other being playing the same game and rank yourself. In most cases, online games do not require any heavy investments. All you need is a system with very minimalistic requirements and of course a decent internet connection.

Card games are the most popular online games. They offer simple gameplays, interaction with all level of players, rookies to professionals and a chance to win cash prizes online. Games like Rummy and Poker are the most played card games among the crowd. You can always know more about it; familiarize yourself with rules to tricks to trivia related to the two games, play and win cash prizes through Adda52.