Spit, also called Slam or Speed, is a card game especially played between two players. The aim is to get rid of your cards as fast as possible. In Spit, each player has a row of stock piles, usually five, and each with the top card face up. A regular deck of 52 cards is used without the jokers. The cards are shuffled and divided equally – 26 to each player. If more than two players want to play then more decks can be used. Each player has to lay out 5 piles on the table. One card is placed face-up, followed by four face-down cards. Then a card is placed face-up on the first face down card, followed by another three face-down cards. This process is repeated until each of the five piles has a face-up card on top. 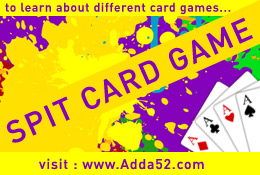 After both players acknowledge readiness, both shout “Spit!” while turning over the top card in their respective stock piles. Both cards are placed side by side between the players’ hands. These two cards and the cards that will be played on top of them are the spit piles. The players now play simultaneously as fast as they want. The objective is to get rid of all the cards in your hand piles and the cards placed in front of you onto the spit piles.

If a position is reached where neither player can play, then both players optionally shout “Spit!” and each places the top card from their respective stockpile on top of the spit pile they started. Play then continues as before.

When playing with only one spit pile, the first player to get rid of their stock cards does not take any cards from the centre; the other player takes the single spit pile and the unplayed stock pile cards. When playing with only one spit pile, if the player with no spit cards in hand also gets rid of their layout cards first, then that player has no cards left at all and he wins the game.