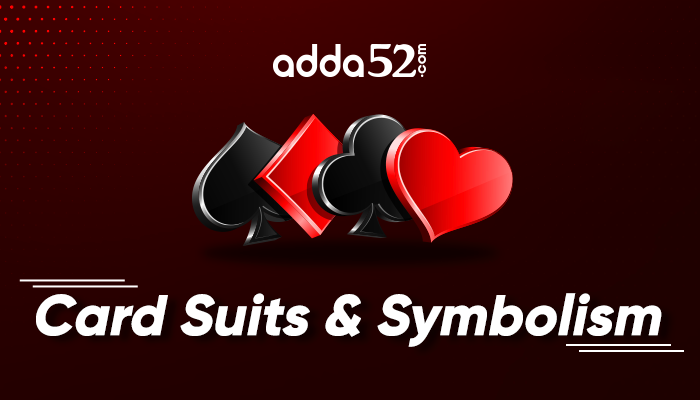 Indian culture has embraced card games a long time ago. Many card games, such as rummy, blackjack, poker, teen Patti, and many others, have originated in India. We’ve all played these games at least once in our lives. Many people even have a deck of cards at home that they use to pass the time in their spare time. A few matches of a card game with friends or family can undoubtedly help you relax, reduce stress, and improve your mood.

Though card games are a game of skill, they also have a profound astrological connection with us due to the deep astrological characteristics hidden inside the symbols of cards. Though you play using your skills in the game, knowing about the card suits & card symbols meaning excite us to play our best. If you ever considered the symbols imprinted on playing cards? Have you ever wondered why a deck of cards has four suits? What is the meaning of each playing card? What does a diamond symbolize spiritually? What is the spade meaning in cards? So, if you were clueless about these intriguing facts, now is the time to learn more about the deeper meaning behind playing cards —

The four suits in a deck of cards symbolize the following:

Hearts: The season of spring is symbolized by a heart card. It’s also meant to be a symbol of the “childhood” stage of life. It represents the fire element.

Clubs: The summer season is represented by the club. The club meaning in cards is the indication of the stage of “youth” when one places a focus on education, recklessness, and so forth. A club symbol meaning is the pinnacle of an earth element.

Diamonds: This card symbol represents the autumn or fall season. It depicts the “growing” stage of a person’s life when he or she is working on his career. In a nutshell, the meaning of the diamond card is a representation of progress, commitment, ethics, and stability. This symbol represents the component of air.

Spades: If you are looking for spades meaning in cards, this is the right place. The winter season is symbolized by the spade. When humans gain knowledge, acceptance, and transformation, it is called the acme of “old age.” This symbol represents the water element and clarifies the spade card meaning in this context.

A deck of cards has 52 cards, which are meant to represent the number of weeks per year. 13 lunar months are represented by the 13 cards in a single card suit. The sum of all the value numbers on the cards is 365. This is what the deck of cards meaning is in a nutshell.

The royal family cards, which include the king, queen, and Jack, symbolize these historical card suits personalities.

To be forthright, the meanings of the cards have no impact on our practical performance; nonetheless, learning such obscure details adds new and intriguing layers to many card games.

Q – What are the card suits called?

Ans –A pack, also known as a deck, is made up of four suits: The four card suits’ names are hearts, diamonds, clubs, and spades.

Q – What do the suits mean in cards?

Ans – The card suit meanings are nothing but just to differentiate the cards from one to another. However, Each suit on a deck of playing cards is believed to symbolize one of the four primary pillars of the Medieval Period economy: Hearts symbolized the Church, Spades depicted the military, Clubs symbolized agriculture, and Diamonds symbolized the merchant class.

Q- Why are the card suits called clubs?

Ans – The club card’s meaning is a three-leafed cloverleaf, and its original French name is Trèfle, which means “clover.” The term “Clubs” comes from the Bastoni (batons) suit in the Italian-Spanish adapted decks.

Q – What do the 4 card suits represent?

Q- What do the symbols on cards mean?

Ans – Card symbolism plays an important role. The symbols on the cards are as follows. Hearts symbolized the Church, Spades depicted the military, Clubs symbolized agriculture, and Diamonds symbolized the merchant class.

Q – How many cards are there in a suit?

Ans – This is one of the generally asked questions “how many cards in a suit”. To answer that question, there are 13 cards in each suit with 52 cards of a deck.

Q – What is the suit order in cards?

Ans – There is no card suit order. In poker online, all card suits remain equal